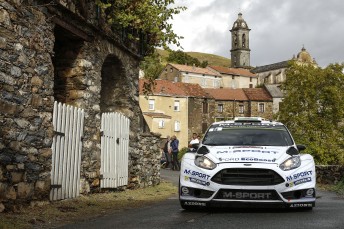 Elfyn Evans out front in Corsica

Elfyn Evans was the shock leader after a truncated opening leg of Tour de Corse – Rallye de France while world champion Sebastien Ogier was forced to retire from the day.

The Welshman, who has endured a torrid recent run, won the last stage in his Ford Fiesta RS to leap from sixth to first. He was 18.7sec clear of another surprise package, Kevin Abbring, with Jari-Matti Latvala completing the top three a further 4.2sec behind.

More than 24 hours of heavy rain flooded parts of the Corsican countryside. Rivers burst their banks and torrents of water poured down the craggy mountains as a medicane, a rare weather phenomenon similar to a tropical storm, hit the Mediterranean island.

The opening stage near Ajaccio ran without interruption, but as the 11th round of the FIA World Rally Championship headed north to Corte conditions worsened. The 43.69km second stage was cancelled as storm debris littered the narrow, twisty asphalt roads.

The third and final stage was held as planned but conditions were dreadful. Drivers battled streaming water, mud and damaged roads and simply surviving was an achievement.

It was therefore no surprise that a Welshman excelled to lead a WRC event for the first time and paid tribute to his route note crew, father and former British champion Gwyndaf and 2003 world champion co-driver Phil Mills, who provided advice on conditions before Evans tackled the stages.

“I’m a bit surprised,” he admitted. “The first stage was difficult, but not due to the conditions as it had dried a lot. In the last stage I had a good rhythm but when there’s that much water, gravel and dirt you concentrate on staying on the road rather than attacking.”

Abbring, who is driving in only his second asphalt event in a World Rally Car, was second fastest in the last stage to vault his Hyundai i20 from seventh to second.

Latvala adopted a risk-free policy in his Volkswagen Polo R to head Citroën’s Mads Østberg in fourth by 15.9sec. The Norwegian reported no ill-effects from the rib injury that ruled him out of the previous round in Coffs Harbour.

Robert Kubica shared the lead with Sébastien Ogier after the opening test, despite being unhappy with his Fiesta RS’ set-up. But the Pole slipped to fifth, 1.5sec behind Østberg and 2.8sec clear of previous Corsica winner Stéphane Sarrazin.

Andreas Mikkelsen was seventh after struggling with his car’s brakes, with Kris Meeke, Bryan Bouffier and Ogier completing the leaderboard. Ogier plunged down the order after changing a rear-left puncture in SS3 after showing stunning pace early in the test. He later retired from the opening day when his car’s gear shift system failed en route to the overnight parc ferme in Bastia this evening – it’s been brought back to Corte for repairs before Ogier makes another attempt at the journey. The Frenchman was in tenth position at the end of Friday’s stages, but the 10 minute penalty for retirement drops him to 55th. 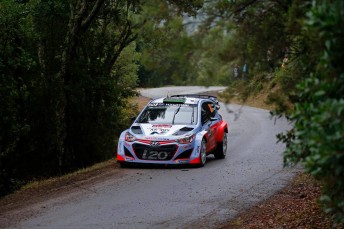 Hayden Paddon is in striking distance in 11th

“I don’t have much experience driving in conditions like that, so I didn’t have any confidence,” said Paddon.

“I just adapted my driving accordingly to get the car to the end of the stage. The afternoon stage started well but after one kilometre we hit a rock and damaged a wheel. We had a bad vibration after that and were very lucky later on when we were close to a sheer drop. It was a heart in the mouth moment, so I was just pleased to make it to the end of the day.”