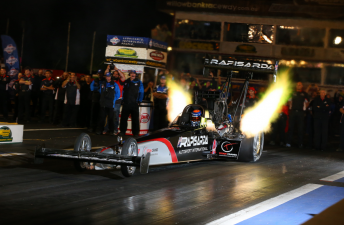 The future of Australian drag racing has taken another twist. pic: dragphotos

Australian drag racing has been plunged into fresh turmoil following a dramatic change of tack by sanctioning body ANDRA.

ANDRA has informed the country’s three major tracks – Willowbank Raceway, Sydney Dragway and the Perth Motorplex – that it does not expect to finalise its proposed Heads of Agreement with the venues for the management rights to a new united series.

The tracks had concluded agreements with all six Group 1 categories to take part in the APDR, and just a fortnight ago issued a calendar featuring the two already completed ANDRA rounds.

ANDRA had been part of the calendar process with its competition manager attending the most recent APDR Commission meeting.

The sanctioning body has subsequently issued a statement today announcing that it will instead run the ANDRA Drag Racing Series and the Summit Racing Equipment Sportsman Series under its own banner.

“The ANDRA Drag Racing Series and Summit Racing Equipment Sportsman Series will resume under the ANDRA Championship banner and the remainder of the season will receive support regarding media including TV for both series and points will be allocated to all competitors,” read the statement.

Although a full calendar is yet to be released, ANDRA has informed the tracks that it has ‘allocated’ rounds of its series to their currently scheduled events.

The move would give ANDRA commercial access to the events that are owned and promoted by the individual venues.

“The ANDRA Series events will continue to be recognised even if individual promoters choose to brand their own events,” read a letter sent to the tracks on Thursday evening.

“It will be necessary to ensure full access at the nominated events for ANDRA personnel and nominated contractors.

The three tracks had announced their own breakaway series in June following disharmony with ANDRA, before the two parties came back together two months later under the Australian Professional Drag Racing banner.