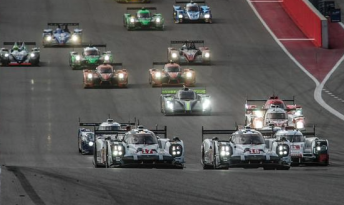 LMP1 cars will be limited to 1000 horsepower next year

The FIA has confirmed it will cap the power produced by LMP1 cars in the FIA World Endurance Championship from next season.

Approved at the FIA World Motor Sport Council in Paris, the move will see the combination of engine and hybrid power limited to 1000 horsepower.

The change has been made on safety grounds with the proposal expected to come into affect next year alongside rules to reduce fuel allocation, which will decrease the power from internal combustion units.

“The WMSC approved the Endurance Commission’s proposal to limit the releasable power for energy recovery systems in LMP1 cars on safety grounds, to avoid the possibility of deployment of an instantaneous total power (engine + hybrid) of over 1000hp,” read a statement from the FIA.

The power cap is likely to affect Porsche the most with its 919 hybrids understood to currently exceed the new total power output limit.

It was also announced that LMP2 cars will undergo minor changes to safety regulations.