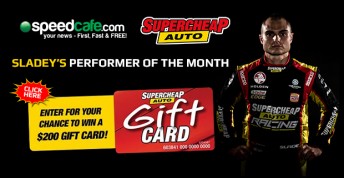 The latest batch of contenders have been selected for Sladey’s Supercheap Auto Performer of the Month.

The five which have been selected for September are:

The lucky winner from the previous month is Bevan from the Sunshine Coast who voted for the most popular performer ‘Maddison walks on water.’

CLICK HERE to see the September contenders and how to lodge your vote, which is open to Australian and New Zealand residents.