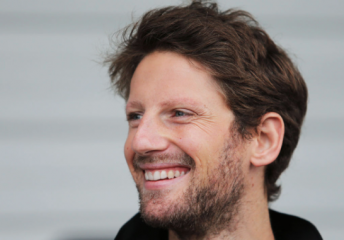 The Haas Formula 1 team has announced Romain Grosjean as one of its two drivers for the 2016 season.

The Frenchman’s anticipated move to the new American operation was confirmed during a press conference at the team’s North Carolina base.

Grosjean joins the Ferrari powered team after four consecutive seasons at Lotus F1 where he has scored 10 podium finishes.

“What Gene Haas and everyone at Haas F1 Team is building is impressive, and I’m very proud to be a part of it,” said Grosjean.

“Formula One is incredibly competitive and the only way to succeed is by finding new ways of doing things.

“This is a new opportunity with a new team that is taking a very different approach to Formula One. I believe in their approach and they believe in me.

“While I am committed to giving my absolute best to my current team in these last five races, I am very excited for what the future holds at Haas F1 Team.”

Team boss Gene Haas had been keen to bring an experienced driver to the team and believes Grosjean is the perfect candidate to lead the squad.

“We wanted an experienced driver capable of developing our car and our race team into one that can score points and better itself each race and each season. We found him in Romain Grosjean,” said Haas, founder and chairman, Haas F1 Team.

“I’ve been involved in motorsports for a long time and learned early on the most crucial component is the driver. Romain has strong credentials and he will be an important asset to Haas F1 Team.”

Grosjean’s Haas F1 team-mate is yet to be announced although it is understood Ferrari test drivers Esteban Gutierrez and Jean-Eric Vergne are among the favourites to land the drive.