Hinchcliffe back in business after Indy crash

Hinchcliffe back in business after Indy crash 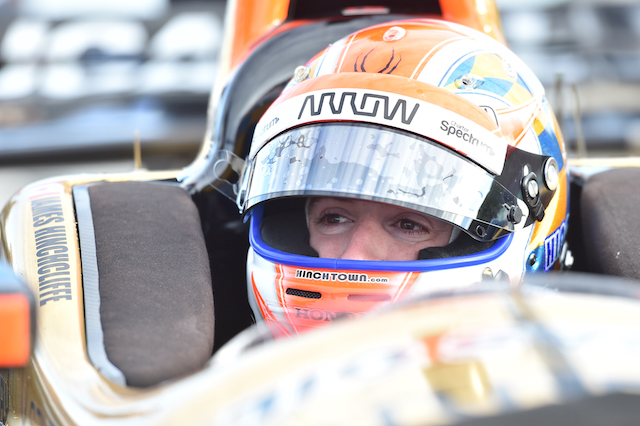 James Hinchcliffe has turned the first laps in his Schmidt Peterson Motorsports IndyCar just over four months after he suffered horrific thigh injuries.

The Toronto driver undertook a single day test at the Road America circuit in preparation for the venue’s return to the series next season after an eight-year hiatus from the schedule.

Hinchcliffe was immediately back in the groove, completing laps at the Elkhart Lake venue along with several other drivers including Bathurst 1000-bound Sebastien Bourdais (KVSH Racing).

“This track is unreal. It’s my favorite one in the country,” Hinchcliffe said.

“So to get to come back here and throttle an Indy car around this place is awesome.”

Hinchcliffe required two rounds of surgery after being impaled by a piece of suspension when his car slammed into the outside wall during practice for the Indianapolis 500 on May 18.

“A lot of (my recovery) was based on healing,” Hinchcliffe said.

“And the doctors, to their credit, they left a lot of it in my hands. They don’t know how I feel.

“They can tell you that medically speaking everything should be healed, but at the end of the day it really came down to how I was feeling, how I was feeling in the gym and things like that.

“I was honest with myself. I wasn’t going to lie just to get back in the car sooner. I wanted to make sure that when I got back I was back for good.”

Others to test were Dale Coyne Racing’s Tristan Vautier and Andretti Autosport pair Marco Andretti and Ryan Hunter-Reay, who were fitted with developmental aerodynamic kits aimed to improve Honda’s road and street course package for next season.

The latest round of testing followed on from last week when 10 drivers turned laps around Road America. Will Power at the Dally M awards in Sydney

Having taken part in last week’s test, 2014 IndyCar Series champion Will Power is back in Australia where he attended last night’s Dally M Medal rugby league celebrations in Sydney.

Power will next week be handed the keys to his hometown, Toowoomba, at a special ceremony.

“He’s a great ambassador for the city,” Antonio said.

“Not only is he at a world level in his profession, he’s a very humble person that hasn’t forgotten his roots in Toowoomba.”

Power made a strong fist of defending his title this season before ultimately finishing third behind Kiwi Scott Dixon who clinched his fourth IndyCar title.