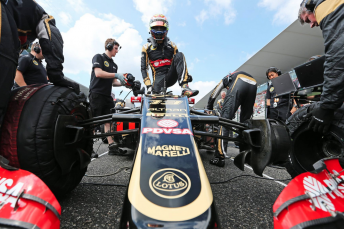 Renault has confirmed its intention to buy the Lotus F1 Team

Renault has signed a letter of intent to buy a controlling stake in the Lotus F1 team, the French car maker has announced.

Confirmation of the agreement follows months of negotiations between Renault and the current ownership group, which includes investment firm Genii Capital.

Embroiled in financial turmoil, the team is today facing another appearance in the UK’s High Court relating to almost £2.7 million in unpaid taxes.

Lotus staff were locked out of the team’s catering facility at the weekend’s Japanese Grand Prix due to other unpaid bills.

A Renault statement says that it hopes to complete the planned buy-in within the coming weeks.

“Renault Group and Gravity Motorsports S.a.r.l., an affiliate of Genii Capital SA, are pleased to announce the signature of a Letter of Intent regarding the potential acquisition by Renault of a controlling stake in Lotus F1 Team Ltd,” read the statement.

“The signature of this Letter of Intent marks Renault’s first step towards the project of a Renault Formula 1 team from the 2016 racing season thereby extending 38 years of commitment of the brand to world’s premier motorsport championship series.

“Renault Group and Gravity will work together in the coming weeks to eventually turn this initial undertaking into a definitive transaction provided all terms and conditions are met between them and other interested parties.”

Renault’s involvement with the Enstone squad dates back to 1995, when it replaced Ford as the team’s engine supplier.

It took ownership from 2000, before selling out to Genii Capital 10 years later as part of the fallout from the 2008 Singapore Grand Prix race fixing scandal.

Pastor Maldonado is currently under contract for next season, while a replacement for the Haas F1-bound Romain Grosjean is yet to be signed.

The Renault deal will see the team switch back to French power following a single year running Mercedes engines.