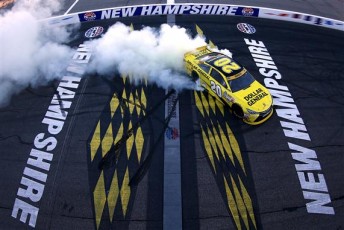 Matt Kenseth has stormed past a spluttering Kevin Harvick with three laps to run to win the Sylvania 300 at New Hampshire Motor Speedway and ensure his progression in the NASCAR version of the Playoffs.

For Harvick a 21st place finish means he all but has to win next week at Dover to advance through to the next phase of the Chase for the Sprint Cup.

Kenseth led 27 of the 300 laps as he beat home another Joe Gibbs Racing 20 Toyota in Denny Hamlin to give that organisation its fourth-straight win and 13th of the season. It was Kenseth’s fifth win of the season, second at Loudon and 36th of his career.

After a cut tyre saw Harvick find the fence last week at Chicagoland Speedway, the defending champion led 216 laps, but couldn’t stretch the fuel window on the run to the finish. He sits 15th in the standings and with the format rewarding race winners, victory or bad performances from others seems the only way he can be within the top-12 in points after Dover.

Kenseth’s performance came on a discouraging day for a handful of Chase drivers. Kyle Busch’s hopes took one of the hardest hits as his No. 18 Toyota smacked the wall on the 159th lap, forcing him to lose 36 laps in the garage for extensive repairs. He finished 37th.

Carl Edwards seemed doomed for a bad day after a pit-road penalty, but he hit back to finish fifth.

Kurt Busch suffered the same fate as his Stewart-Haas Racing teammate Harvick, running out of fuel with two laps remaining and sinking to a 19th-place finish. It was the same fate for Dale Earnhardt Jr. who went from a top-10 to 25th.

Jimmie Johnson made an unscheduled stop at Lap 200 for a flat tyre, but he showed his determination to battle back from 30th to finish in sixth.

Clint Bowyer is another driver who must win at Dover, after a points penalty for technical infraction last week, he faded to finish in 26th.

The biggest incident of the race occurred on lap 205 when Danica Patrick slid into the wall after contact with Ryan Newman. Her car came down the track and was collected by David Ragan. Neither driver was injured in the incident, but the race was stopped to clean-up a massive amount of debris.