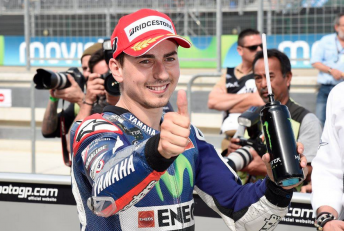 Jorge Lorenzo scored his sixth win of the season

The Yamaha rider took the lead on the opening lap and was left untroubled at the front after a lap two fall for his compatriot.

Marquez was visibly furious after losing the front-end of his Honda through Turn 12 and sliding into retirement while chasing Lorenzo.

“My strategy was to ride at the maximum, which worked well because I think Marquez was at the limit to follow me,” he said.

“I didn’t expect his crash and when I saw on my board his crash I breathed easier.”

Dani Pedrosa and Valentino Rossi put on an entertaining scrap for second place that raged until the chequered flag.

The duo swapped places four times on the final lap alone, with Pedrosa securing the runner-up spot by just 0.09s.

“It was really hard to focus on keeping the lap time and also closing the doors, because in many corners Vale was faster,” smiled Pedrosa.

“I knew in the last laps I had a little bit less grip because I could hear his engine all the time on the exit.

“I don’t know how many times we overtook each other but it was nice to arrive second in front of all the fans.”

Rossi embraced his rival in parc ferme post-race before declaring third a strong result considering his lack of pace throughout the practice and qualifying sessions.

“I tried everything but Dani was able to overtake me both times in the next corner,” he said of the last lap battle.

“I’m happy because compared to the practice I had a good race, but I needed those points. Today it was not possible.”

Front-row starter Andrea Iannone was more than 20s adrift of the winner in fourth place on his Ducati, while team-mate Andrea Dovizioso completed the top five.