Hamilton bounces back to dominate in Japan

Hamilton bounces back to dominate in Japan 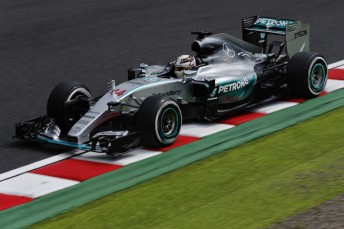 The decisive moment of the race came when the Mercedes driver squeezed by Rosberg at Turn 2 on the opening lap in a move that saw his team-mate drop to fourth.

Once ahead, Hamilton never looked back as he went on to take the chequered flag with a 18.9s margin from Rosberg, with the Ferrari of Sebastian Vettel in third.

Hamilton’s triumph saw the Brit record his 41st F1 victory to equal the tally of the late great Ayrton Senna.

While Hamilton controlled the race, the battle for the podium places provided entertainment as Rosberg made the most of a slick pit stop strategy to haul himself by Williams’ Valtteri Bottas and Vettel to claim second spot.

Vettel proved unable to match Mercedes’ pace leaving him powerless to stop the Silver Arrows from recording a dominant 1-2 finish.

The sister Ferrari of Kimi Raikkonen spent the middle stint of the race locked in a battle with Bottas for fourth, which he eventually won after completing a successful undercut on his final pit stop.

The Force India of Nico Hulkenberg enjoyed a solid drive to sixth behind Bottas, with the Lotus pair of Romain Grosjean and Pastor Maldonado seventh and eighth.

A fighting drive from Toro Rosso’s Max Verstappen saw him finish ninth after starting from 18th, while team-mate Carlos Sainz rounded out the top 10.

It proved to be a difficult race for Daniel Ricciardo and Felipe Massa as the pair clashed at the start resulting in punctures for the duo.

Ricciardo managed to launch alongside Massa at the start but the Williams driver moved across which saw the cars briefly touch wheels.

The Australian suffered a leftt rear puncture while Massa picked up a front right failure.

After being forced to pit on the opening lap, the duo eventually came home in 15th and 17th positions respectively.

Meanwhile, McLaren’s struggles for pace continued on Honda’s home soil as a frustrated Fernando Alonso missed out on a points finish in 11th with Jenson Button in 16th.

The second Force India of Sergio Perez produced an impressive recovery drive to 12th after suffering a puncture following an excursion on the opening lap.