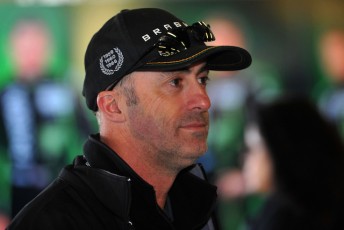 David Brabham says his plan to revive the family team in the World Endurance Championship as early as next year remains on track.

The Project Brabham plan swung into action 12 months ago with the initial crowdfunding target of £250,000 ($464,000) reached in the first phase of the plan.

Brabham says some key leads with investors see the next phase of the project encouragingly moving forward.

The structure of the project means finance from investors is needed ahead of the any move to put in place the racing side of the business.

Despite this Brabham says the Project Brabham squad could still be on the grid in LMP2 next year ahead of the new WEC regulations for 2017 which sees just four chassis manufacturers and a single engine supplier.

“We’ve been doing some work in the background like where we are going to base ourselves, what the prices of for rent etc.

“We are talking to some of the manufacturers and getting a bit more information about what they are trying to do in the future.

“Obviously 2016 we are planning to get out as early as we can. But it depends on when the money arrives. In 2017 there are new car regulations so there is a lot from the racing side to make sure we go down the right path for that.”

“It (change of regs) doesn’t really affect what we are doing because we’ve got enough in the budget to absorb that.

“The most important thing is to raise the money and the only way we are going to do that properly is not going out there and selling it as a race team but a content business that we will take to market.”

Brabham said that each stage of the project has met its targets.

“Although it doesn’t seem like it on the outside we’ve achieved quite a bit.”

To date there are 3000 members from 64 countries who have jumped on board to support Project Brabham.

The WEC has previously announced that Oreca, Dallara, Riley Tech Multimatic and Onroak Automotive will be the official chassis suppliers in 2017 while Gibson Technology (formerly Zytek) will be the sole engine supplier.

“The race team is separate. This is the business that is the digital platform and how we monetise that and how it supports the race team.

“In terms of the race team side of it nothing is going to happen until we raise the money.

“For me I’ve got to be realistic enough to know you’ve got to put the business together properly, get the right funding and we’ll build the race team.”

The companies under Project Brabham have undergone a restructure to make it more attractive from a tax benefit point of view in the UK for companies to invest.

“So under the restructure companies who say want to put in £100,000, the UK government give them back £30,000 straight away and if its seed investment they give them 50 percent of their money back,” Brabham said.

“It’s a proper business and it’s no playground. It’s a massive change for me because as a driver I’ve lived the dream for 30 years and never worked a day in my life.”

David Brabham, the youngest of Sir Jack’s three sons, won the Le Mans 24 Hour outright in the diesel-powered Peugeot 908 in 2009 after winning his class at La Sarthe for Aston Martin the previous two years.