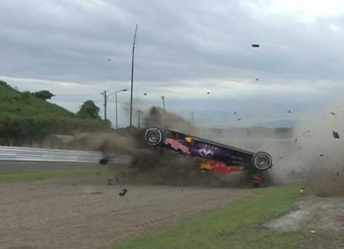 Daniil Kvyat will start the Japanese Grand Prix from the pit lane after escaping injury in a huge crash at Suzuka which severely damaged his Red Bull RB11.

The Russian driver brought out the red flags in Q3 when he made heavy contact with barriers heading towards the hairpin, resulting in a violent roll before coming to rest in the gravel trap.

After assessing the damage, Red Bull boss Christian Horner has confirmed that Kvyat will be forced to start from the pits as mechanics work into the night to build up a car for the 21-year-old.

Kvyat ended qualifying in 10th position after failing to post a time in Q3.

“The most important thing today is that Dany is alright after what was a very big accident in Q3,” said Horner.

“It’s a testament to the strength of these cars and shows why safety is always our priority in this sport.

“Clearly, we will have a very long night producing a car for him to race tomorrow. He will have to start from pit lane and has nothing to lose so he will be running an aggressive race.”

Lucky to escape the incident without injury, Kvyat admitted a rookie driving error caused the crash and has since apologised to the team.

“I’ve never rolled a racing car before and they say there’s a first time for everything,” said Kvyat.

“I’m feeling more disappointment than pain. I put two wheels on the grass and there was not much run off area at that point so it put me straight into the wall.

“I was pushing hard after a messy FP3 and this is the consequence of going over the limit.

“The car looks really bad and I’m sorry for the guys who have already had a tough couple of weeks and now they have even more work to do.”

Meanwhile, the grid has been altered after Max Verstappen was handed a three place grid penalty from the stewards for stopping in an unsafe location during Q1.

The Toro Rosso driver suffered an electrical fault which saw him grind to halt on the exit of the hairpin.

Following the penalty, the teenager will start Sunday’s race from 18th position.