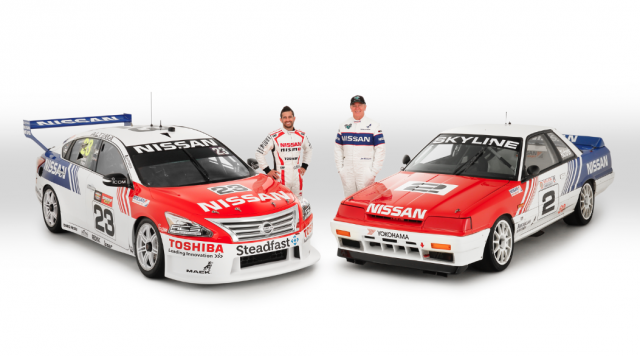 Caruso and Richards with their respective 2015 and 1990 Nissans

Nissan Motorsport will run a retro livery on its Michael Caruso/Dean Fiore Altima at Bathurst to mark the 25th anniversary of the marque’s first Australian Touring Car Championship crown.

The #23 Altima will sport the scheme run on Gibson Motorsport’s factory backed HR31 and GT-R Nissan Skylines during 1990.

Jim Richards defeated a horde of Ford Sierra runners to win that year’s ATCC, utilising the HR31 for the first six rounds before switching to the new GT-R for the final two. 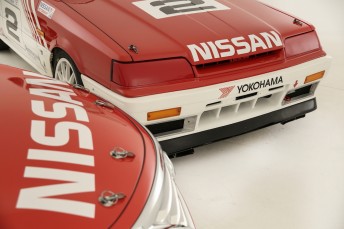 Nissan is paying tribute to the HR31

Although the HR31 was around 100bhp down on the Sierras, Richards used the superior balance and tyre life of the Nissan to pick up wins at Amaroo and Winton.

Nissan Australia CEO Richard Emery says that that HR31’s achievements in 1990 are too often overshadowed by the introduction of the GT-R, which went on to dominate the ATCC and Bathurst for the following two seasons.

“We were really pleased with the reaction to the Bluebird ‘retro’ livery that we campaigned at last year’s Bathurst 1000 and we are confident that the fans will be just as excited to see the Skyline colours return to Mount Panorama this year,” said Emery.

“It’s fantastic to see the affection that Jim still holds for the Skyline, so much so that he has bought the car and is racing it again. 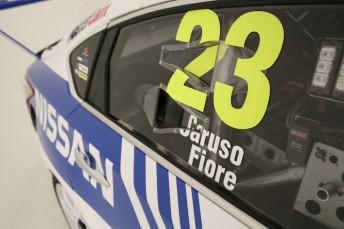 Caruso and Fiore team up for the third consecutive year

“The GT-R R32 gets a lot of attention, even to this day, but the achievements of the Skyline HR31 should not be forgotten.”

A four-time Australian Touring Car champion and seven-time Bathurst 1000 winner, the 68-year-old Richards bought his title winning HR31 back two years ago and continues to campaign it in historic competition.

Scoring his first two ATCC titles in BMWs, Richards joined Gibson’s Nissan squad in 1989 and remained at the team into the 5.0 litre V8 era, when the squad campaigned Holdens.

He says the HR31, which was also campaigned by factory teams in Europe and Japan, was his favourite car from the Group A era of touring car racing.

“I always liked this colour scheme better than the ones that came later, so it looks really great to me,” he said of the retro tribute.

“It (the HR31) was my favourite car actually out of all the ones I’ve driven, even the GT-Rs.

“The fact that the races were quite long (in 1990), you’d get quite a lot of tyre degradation and the Sierras with more torque and horsepower would damage their tyres more than the Nissan. 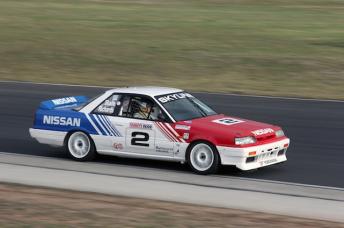 “That’s what we took advantage of throughout the season.”

Skipping the Sandown 500, the Richards/Mark Skaife GT-R led early in the Bathurst 1000 before striking mechanical problems and finishing 18th.

Skaife subsequently wrote off his GT-R in November’s Australian Grand Prix meeting in Adelaide, before pole at the Australian Endurance Championship ending Sydney 500 came to naught with more mechanical trouble.

Alan Heaphy, who had developed the HR31 while running Nissan’s European touring car program in 1988, was posted to Australia for 1991, overseeing the subsequent period of GT-R dominance.

Nissan heads to Bathurst this year looking to build on recent development work that saw it roll out an upgraded engine at the Sandown 500.

The manufacturer scored a surprise second place in last year’s Bathurst 1000 with James Moffat/Taz Douglas, before returning with its GT-R GT3 to win February’s Bathurst 12 Hour. 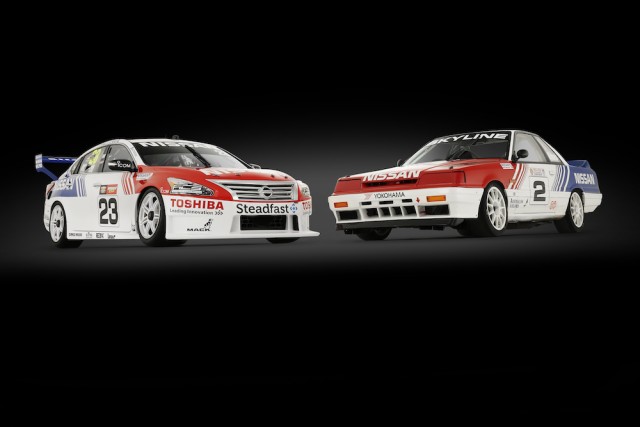