McLaren hopes to keep Button for 2016

McLaren hopes to keep Button for 2016 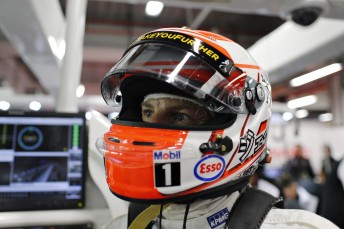 McLaren is hopeful it can convince Jenson Button to stay with the team for next season as the Brit contemplates calling time on his Formula 1 career.

The Woking team has an option on Button’s contract for 2016, which is believed to expire at the end of the month.

It had been expected that the 35-year-old would announce his retirement at this weekend’s Japanese Grand Prix but the Brit is yet to make a statement on his future.

While remaining coy on his plans, Button affirmed during Thursday’s press conference that he is in ongoing talks with McLaren.

McLaren chief operating officer Jonathan Neale says the team intends to keep Button for 2016 but would not stand in the way of its driver’s decision.

“I really hope we’ve done enough between us to continue discussions with him and have the confidence to have him with us,” said Neale.

“There has been a lot of discussion about where Jenson is going.

“Jenson is a fantastic guy, world champion and a big part of our family and we’re contracted with him.

“We want him to stay, we like him very much but if your driver really doesn’t want to be in the team, you have to respect that.”

Although tight-lipped on his future, Button has said this weekend he would be keen to race in the World Endurance Championship in the future.

The championship has already been earmarked as Button’s most likely destination once his F1 career comes to an end.

“In the right situation, I could see me doing that (WEC) in the future,” said Button.

“I’ve watched a lot of races over the last couple of years and I love the team atmosphere – it’s a massive team event.

“Achieving a win in a 24-hour race is something I think every driver would love. It’s a very special accomplishment.”