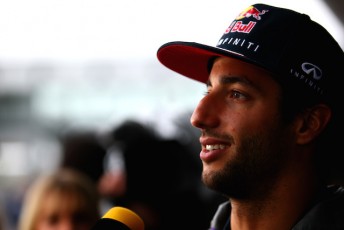 The future of the Milton Keynes operation is under question after claims it will leave the sport if unable to secure a competitive engine for the 2016 season.

An early termination to its contract with engine supplier Renault and a lack of interest from Mercedes has led Red Bull to seek alternative options with Ferrari.

While a deal with the Italian marque is far from certain, Ricciardo says he’s unconcerned about his F1 future and is confident Red Bull will come to an arrangement regarding its engine supply.

“Christian (Horner) and Helmut (Markko) are confident we’ll figure it out one way or another,” said Ricciardo.

“Obviously it’s in our interest to try and get the best. We want to win as well, so that’s what we are trying to get.

“I haven’t broken (Red Bull owner) Dietrich’s (Mateschitz) balls yet, I’m sure he’s got a lot on his plate.

“I’ll let him do what he needs to, and if it gets later into the year and still nothing has come then I’ll maybe make a little bit of noise.

“But honestly I don’t feel it will get to that. Right now I’m not concerned. I’m more curious to see what happens.

“It’s still only September, don’t get me wrong, the sooner we have an answer the better, we’re not in November, December yet.

“When it starts getting towards that part of the year then you’ve got to start really deciding what’s going to happen.

“But it’s still early and I’m confident we’ll get what we’re after.”

After scoring his best result of the season with a second place finish at last weekend’s Singapore Grand Prix, the Western Australian has readjusted his targets for Sunday’s Japanese Grand Prix.

The 26-year-old believes his Red Bull won’t be too far behind Mercedes and Ferrari.

“I think we can make up good ground in the corners looking at Williams, what we should gain in the corners I expect they’ll make back on the straights,” Ricciardo added.

“We’ll be fighting with Williams, and if all goes well we should be in front of them, and hopefully not too far behind Mercedes and Ferrari.”