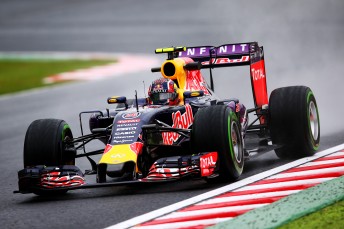 Daniil Kvyat mastered difficult wet conditions to top the times in practice ahead of the Japanese Grand Prix.

The Russian proved the Red Bull RB11 is well equipped on a wet track as he edged the Mercedes duo of Nico Rosberg and Lewis Hamilton at the Suzuka circuit.

Kvyat set the benchmark in the session with his opening run on intermediate tyres before he was briefly dislodged by Rosberg.

However the Red Bull driver responded with a 1:48.277s which proved to be the fastest time of the day, as heavy rain returned for the final 30 minutes of the session.

Several drivers chose to fit wet tyres to collect data in the remaining half hour.

Rosberg, running a repaired engine from Monza, trailed Kvyat by 0.023s while championship leader Hamilton was 0.576s back in third.

The second Red Bull of Daniel Ricciardo emerged in fourth 0.8s adrift of his team-mate.

Ferrari’s Sebastian Vettel clocked the most laps in Practice 2 with his best time good enough for fifth in the session and sixth overall, fractionally ahead of Kimi Raikkonen.

Jenson Button proved to be the best of the McLaren Honda entries in 12th, while team-mate Fernando Alonso, who was forced into an engine change in Practice 2, finished 17th.

Valtteri Bottas elected not to run in Practice 2 choosing to conserve his allocation of intermediate and wet tyres.