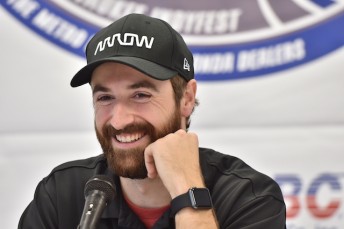 James Hinchcliffe will return to his Schmidt Peterson Motorsports IndyCar Series seat in a test at Road America on Monday.

The Canadian was severely injured during a practice crash in the lead-up to the Indianapolis 500 in May with his seat filled for the remainder of the IndyCar season, which finished last month, by Australian Ryan Briscoe.

“I expect to be grinning like an idiot for the first few runs,” Hinchcliffe said.

The horrific thigh injuries Hinchcliffe received in the shunt have required two operations.

“This is obviously the day that has been the goal and the motivation to get through the last four months,” he explained.

“And the fact that it is at Road America, one of my favourite road courses in the country, makes it that much better.

“I’m under no illusions that it won’t be a massively difficult day.”

“Going to a track we haven’t run, on top of the physical stress of getting back in (a car), but that’s okay. I’m definitely ready for a little hard work.”

Reigning IndyCar champion Scott Dixon was one of 10 drivers who competed in a test at the Elkhart Lake circuit, which returns to the series next year after an eight-year absence, earlier this week.