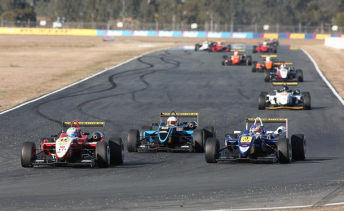 Australian F3 is set to learn its fate from the FIA

CAMS and the Australian Formula 3 Championship have submitted a proposal to the FIA aimed to secure the future of the category in the region.

The creation of an Asia Pacific Formula 3 Championship to act as a feeder series to the FIA European F3 Championship is a key part of the proposal.

The paper also features plans to strengthen the domestic Australian F3 competition, which could ultimately see the category retain its national status.

CAMS representatives met with key Australian F3 figures at Phillip Island last week to discuss the plan, which has been passed to the FIA ahead of the FIA World Motor Sport Council held on September 30.

The proposal appears to be a lifeline for Australian F3 after it received the news from CAMS in June that it would lose its championship status as part of a recent national motorsport review.

Under the review’s plan, F3 will become a CAMS Authorised Series next year before being relegated to state-based competition in 2017.

The domestic single seater shake up emerged shortly before the launch of CAMS Jayco Formula 4 Championship, which was awarded national championship status.

CAMS general manager Michael Smith said the proposal has been put forward to ensure Formula 3 remains a sustainable championship in Australia to ease the pathway of young drivers.

“The strategy from the FIA’s perspective is to have domestic or national F4 championships lead into regional Formula 3 championships,” Smith told Speedcafe.com.

“Whilst we support that in principle we recognise the there are some challenges to get a viable Asia Pacific Formula 3 Championship up and running.

“For that to have a chance we need to sustain a domestic Formula 3 competition at least in the interim.

“There has been eight or so Formula 4 championships established this year and there will be around 250 drivers that will come out of those F4 championships, and not all of them will be able to step into the F3 Euro Series.

“We are trying to work with the FIA to find ways in which we can maintain a very sustainable F3 competition here in Australia.”

Smith confirmed that part of the process could see Australian F3 regain its championship status, but stressed an Asia Pacific F3 Championship, alongside the domestic F3 series, is an important part of the proposal.

“That is part of it (Australian F3 regaining its championship status), the other part of it is creating a second tier F3 competition not only here but in other markets, that could be a stepping stone from F4 into the F3 Euro Series,” he added.

“We (CAMS) were a little bit bound by the FIA. As it stands under the rules of the FIA it (Australian Formula 3) can’t qualify for championship status.

“What we are trying to do is talk to the FIA and say there is a need to have F3 in some way shape or form in this region, and we need to keep it viable particularly if we are going to have an Asia Pacific championship.

“There are only a handful of seats in the Euro F3 championship and also competing in that is a fairly large cost commitment. We see there is potential to have a step in between.

“We just need to work with them to make sure it is viable in a cost sense and provides sufficient competition.”

Australian Formula 3 category manager Ian Richards attended the meeting last week and is in support of the proposal.

Although he did warn that the formation of an Asia Pacific Championship would need thorough evaluation.

“It was a positive meeting we are all singing hymns from the same hymn book,” Richards told Speedcafe.com.

“I can see an Asia Pacific F3 championship working if someone is willing to pay for it.

“We did Asian F3 in the early 2000s and it eventually collapsed due to a lack of money and other reasons, it is a grossly expensive exercise.”