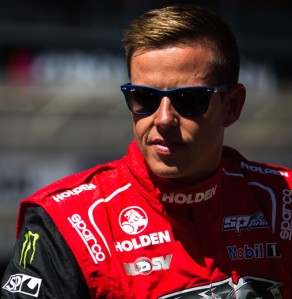 Injured V8 Supercars driver James Courtney is closely following the exploits of a couple of young Australian karters who are tackling the CIK-FIA World KF Junior Championships in Italy this weekend.

It has been 20 years since James Courtney burst into the international limelight by winning the World Junior Karting in Portugal.

Brisbane’s Ryan Suhle and Melbourne’s Aaron Cameron will be flying the flag for the Aussies in the underage competition.

“I’m very excited about seeing Ryan in action this weekend, I was hoping to be over there to support him but I’ll be tuning in through the live streaming on the internet instead,” Courtney said.

“It’s his first international race, I’m not sure who’s more nervous – him or me.”

Courtney says that the experience of racing against the world’s best can be daunting.

“For me the craziest thing was just to be there with the factory teams and everything, but once you pulled on the helmet it was like being at Lithgow and Oran Park. 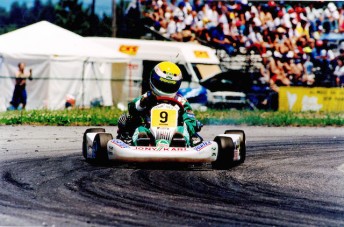 James Courtney during this successful World Karting Championship campaign in 1995

“Racing in Europe matures you very quickly, you need to understand that all of the other drivers are just like you and you can’t be intimidated by them.

“They’ve all got two arms and two legs just like you, there’s no reason why they can’t be beaten.”

Courtney’s karting triumph came against drivers who have transitioned into grand prix drivers.

“My biggest rival in karting would probably be (Vitantonio) Luizzi, we went head to head in just about every event we went to,” said Courtney.

“Kimi Raikkonen, Anthony Davidson and Jenson Button were always there as well, while Robert Kubica, Lewis Hamilton and Nico Rosberg were one step behind us.

“I had some great battles with them while I was in Europe and we all learnt a lot by racing each other at that level, but it is also the smaller events back home that I remember well.

“The little things like club races that we’d have at Lithgow where (Ryan) Briscoe, myself, Troy Hunt and Mark (Winterbottom) would race and some of the dices we’d have as young guys were awesome.

“Some of the racing there was probably the best I’ve had in my career – we were passing each other four and five times a lap.”

Also competing at the same event as the junior pair will be South Australian Josh Tynan, who last year made his international debut at the corresponding event in the KF class.

He will once again be teaming up with the Energy Corse outfit in the CIK-FIA World KF Championship.

Courtney is meanwhile continuing his rehabilitation efforts in the hope of being fit for next month’s Supercheap Auto Bathurst 1000 after sustaining five fractured ribs and a punctured lung at Sydney Motorsport Park in August.