The pair will join a list of seven rookies for this year’s edition of the 1000km enduro alongside IndyCar star Sebastien Bourdais (#18 Walkinshaw Racing) and the wildcard pairings of Renee Gracie/Simona de Silvestro and Aaren Russell/Drew Russell.

Jones is the latest member of the Albury family to contest the race following in the footsteps of his father Brad Jones, who missed out on Bathurst glory during his touring car career.

The 21-year-old, who will join Dale Wood behind the wheel of the #21 Brad Jones Racing entry, says completing his maiden V8 Supercars start at the Wilson Security Sandown 500 has eased him into the Bathurst assignment.

With the event held in such high esteem by the Jones family, the Dunlop Series regular says there will still be plenty of nerves come the race.

“It is such a big event for everyone in our team every year we always look forward to this race meeting. And for me it’s quite a stressful one because my dad is so passionate about that track and always had good results there but never been able to win it,” Jones, who finished 20th at Sandown, told Speedcafe.com.

“That passion has carried on to me and while we are not looking to win the race right now we are confident we can do our best to get a good result.

“While it is important to stay out of trouble we don’t want to be sacrificing ourselves.

“There are definitely going to be nerves through the weekend but I have got to just stick to the job in hand.” 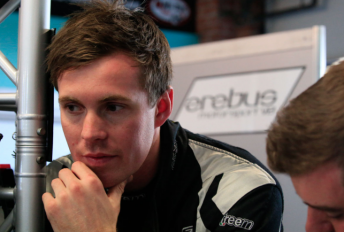 Jack Le Brocq is looking to impress at Bathurst

Le Brocq heads to the event with plenty of mileage at Mount Panorama under his belt having raced in Formula 3 and the Bathurst 12 Hour at the 6.2km circuit.

Making his Bathurst 1000 debut with Ash Walsh in the #4 Erebus Mercedes, the 23-year-old sees the opportunity as a crucial chance to establish himself on the co-driver market for the future.

“I definitely know my way around there now I have had plenty laps there in different cars,” Le Brocq told Speedcafe.

“It is very different in a V8 Supercar. The way those cars work over the top of the mountain is difficult thing to master.

“We have just got to go there have a clean run and if we can end up in the top 10 I will be pretty rapt with that and anything above that will be unreal.

“It is one of those things that you want to do the best job possible and make sure that people know you can do a good job whichever car you jump into.”