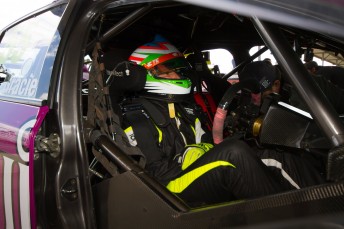 Simona de Silvestro is set to embark on one of her biggest career challenges when she tackles the Supercheap Auto Bathurst 1000 for the first time next month.

The Swiss-born De Silvestro has earned the reputation as one of the best female drivers in the world having undertaken stints in IndyCar from 2010 and a test role with the Sauber Formula 1 team.

The 27-year-old, who has recently signed a deal to compete in the FIA Formula E Championship with Andretti Autosport, has been steadily building her preparations for a maiden touring car assault.

Speedcafe.com’s Tom Howard sat down with de Silvestro following her maiden run in a Dunlop Series V8 Supercar at Queensland Raceway this week to discuss her Mount Panorama debut and her future career plans.

SPEEDCAFE: Firstly how does driving a V8 Supercar for the first time compare to other race cars you have driven in your career? SIMONA DE SILVESTRO: It’s very different from an IndyCar or an open wheel race car, which is what I have the most experience in.

It’s pretty challenging because of the way you have to drive it but I’m enjoying it and it has been a lot of fun so far.

I got in the car and because everything is so different it felt like I’d never driven before but it was fun to learn.

I managed to log a few laps and it got better and better every time I went out.

For sure that is a positive but there is a lot in me to get to where I want to be.

SPEEDCAFE: What was the most surprising factor you noticed when driving the car?

It is really fast down the straight and that impressed me. It really goes. I can’t really compare it to many touring cars but it has been fun. 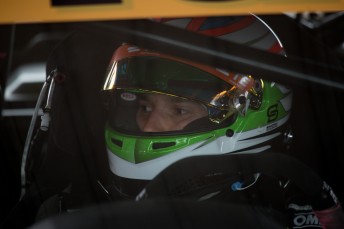 The car moves around much more than any open wheel car and I think that is what I am struggling the most with at the moment.

SPEEDCAFE: How important has the test day at Queensland Raceway been for your Bathurst preparations?

DE SILVESTRO: Every time I get to be in the car it’s very important because every lap you learn something out of it.

Tonight when I go to sleep I’m sure I will think about a few things I have learned today for the next test.

I’m not where I want to be but i have had a good start as I now know how the car behaves.

SPEEDCAFE: Now having driven a V8 Supercar has it made you ask the question ‘what am I taking on here’?

DE SILVESTRO: No, not at all. It is very different it’s brand new to me.

It is fun as a challenge because there is so much in me as a driver, it’s cool to learn what I need to do to be fast. DE SILVESTRO: It has been awesome. Paul is really useful as he knows how to drive these cars and I’m really lucky to have him around.

I have heard a lot of positive things about Renee and we are getting to know each other. I think we will make a pretty good team together.

SPEEDCAFE: How crucial is the first test next week in the Falcon FG X you will drive at Bathurst?

DE SILVESTRO: It is going to be really important, I’m really happy to have two days of testing as there is is a lot in me as a driver and also there is a lot to learn about how the car is working with the team for the first time.

I wish I had more days but it is what it is and you have to work form there but it would be better if i was driving every day.

SPEEDCAFE: What was the defining factor that drew you to this V8 Supercars project and what are the targets you are setting yourself? 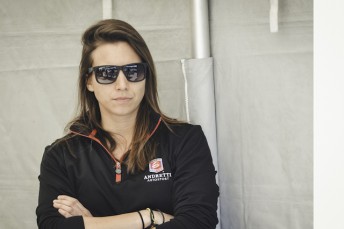 When Chris (Jewell, Gracie’s manager) called me asking if I wanted to do it, it was a no brainer.

In terms of goals, it is hard to say because I have never been to the track or raced in the cars so I can’t say we are going to win or anything like that.

We have to be realistic, but if we can do our job correctly then I think we can have a good result.

SPEEDCAFE: Have you thought that V8 Supercars may be a career choice for you in the future?

DE SILVESTRO: I have always been open wheel driven but right now open wheel is really difficult especially where I am at.

For IndyCar and Formula 1 you need sponsorship for that so you have to start looking around a little bit, so I’m really glad to have this opportunity to come and drive a V8 Supercar and if I like it then why not.

SPEEDCAFE: How have you been preparing for Bathurst prior to your first run in a V8 Supercar? 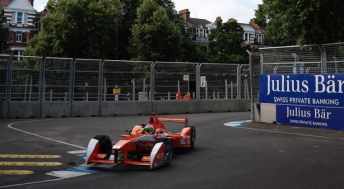 DE SILVESTRO: I have watched a lot of videos to try and understand the track and how the cars work on the circuit.

You can do all the preparation but the first time you get out there is the first real chance to work out how the circuit really is.

It is always hard to picture a circuit when you haven’t been there.

For me I think everything is going to be overwhelming because I don’t know the car and the track looks difficult. It is a challenge but I look forward to it.

SPEEDCAFE: You have moved into Formula E for this year with Andretti, but are you still hoping to race in IndyCar next year?

DE SILVESTRO: I’m really lucky to have the Formula E deal. Right now it is a new series for me.

I’m at a really good team with Andretti and I would love to be racing in IndyCar but sometimes you have to open your mind a little bit.

We are still working on IndyCar. I don’t know right now, it is still pretty early but maybe something can happen.

Funding is a crucial part of it sadly and it is something we struggle with but we will see. Like I say I am lucky with the Formula E deal and I think it is going in the right direction and there is a lot of interest in it. The level in Formula E is really high and that is my focus now and hopefully we can be running up front there and maybe that can open up doors.

SPEEDCAFE: There is an all female team hoping to do the Indy 500 next year, is there a chance you can get involved in that project?

DE SILVESTRO: I don’t think so. I’m pretty set with Andretti right now and anything in IndyCar would have to be with them.

It is good to be with a team like Andretti currently because there is a lot of different projects at that operation.

I’m really lucky to have been given the chance to join the Andretti family, so we’ll see.