Audi plans upgrades ahead of Japan WEC round

Audi plans upgrades ahead of Japan WEC round 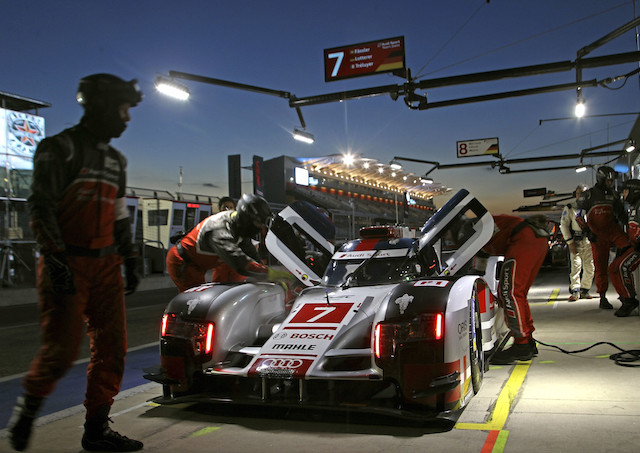 A list of unspecified upgrades will be welcomed onto Audi’s twin R18 machines as it tries to arrest a diminishing gap in the driver’s standings to Porsche ahead of the next World Endurance Championship round.

Audi goes into the Fuji 6 Hours from October 9-11 with the #7 R18 e-tron quattro driven by Benoit Treluyer, Marcel Fassler and Andre Lotterer clutching a 10-point edge.

The #7 Audi overcame a strategy gamble by starting the race on hard compound tyres and cashed in on the demise of the #18 Porsche to finish second in Texas and minimise its points loss.

The #18 919 was garaged with an electrical problem when leading its sister car with just over 30 minutes remaining before rejoining inside the final minute to be classified in 12th overall.

The Mark Webber, Brendon Hartley and Timo Bernhard #17 Porsche 919 Hybrid took its second straight victory in Round 5 of the WEC to narrow the gap on the points-leading Audi.

While the upgrades will prove crucial, Audi is also wrestling with how it can reverse a pit stop disadvantage to its German relative.

“There are some upgrades planned for the next race but we will need to find a solution to avoid losing five seconds to the Porsche during each pit-stop,” Treluyer said.

“We have a fantastic chassis, which will help us offset Porsche’s eight megajoule hybrid system.

“Our best race lap is only one tenth shy of the fastest Porsche when there is no traffic.

“However, at the same time we struggle more when in amongst traffic because we have less of a boost with our (4MJ) hybrid system.”

Treluyer is expecting better performance from Audi at Fuji with the layout more suited to the aero package than the Circuit of the Americas.

“Fuji’s layout will be more favourable for us than Austin as we’ll be able to exploit the Audi R18 e-tron quattro’s stronger characteristics such as its excellent aerodynamics,” the 2012 world champion said.

“If we manage to find good mechanical grip in the last sector we will be impressively quick.

“Japan is a special place for both myself and Andre but neither of us has ever won an FIA WEC round at Fuji before, so we’re itching to get back there.

“It’s definitely a circuit where we would like to return to our usual form by scoring a great victory.”

Porsche hold the whip hand in the manufacturer’s standings over Audi by moving to 220 points, 36 clear of the Ingolstadt maker while Toyota languish on 101 points.

Driver’s points after 5 of 8 rounds