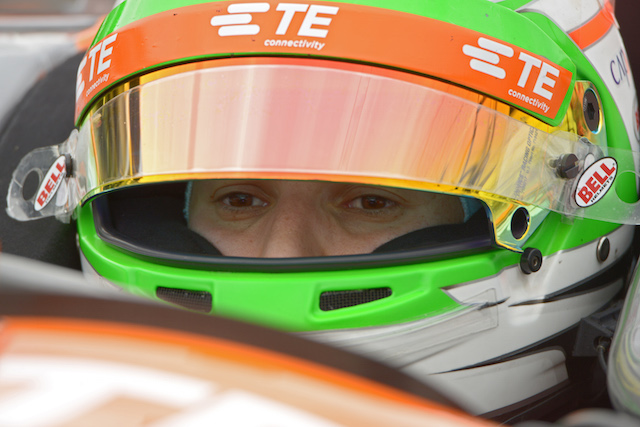 Simona de Silvestro will take the plunge in a V8 Supercar for the first time at Queensland Raceway today ahead of her widely anticipated wildcard entry in the Supercheap Auto Bathurst 1000 next month.

The Swiss-born open-wheel driver will begin her preparations by jumping behind the wheel of a Dunlop Series Falcon FG which is campaigned by her Bathurst partner Renee Gracie.

At Mount Panorama, the pair will pilot a Prodrive prepared entry which will, as previously announced, run under the Harvey Norman Supergirls banner.

The Falcon will carry the #200 which ties in with Bathurst’s bicentenary celebrations.

Announced as a two-year Bathurst 1000 wildcard deal last month, De Silvestro and Gracie will be the first all-female pairing to tackle The Great Race since Melinda Price and Kerryn Brewer in 1998 and the first women to drive in the showpiece race since 2009.

The test day at Queensland Raceway had been pre-arranged for Gracie however it will now dovetail into a key acclimatisation day for the 27-year-old de Silvestro.

While Gracie’s Paul Morris Motorsport Dunlop Series Falcon is a different specification to the COTF Prodrive Falcon the pair will race at Bathurst, the track time will prove invaluable as de Silvestro adapts to driving a touring car.

De Silvestro’s career to date has been predominantly focussed in open wheel categories featuring in a stop-start IndyCar career since 2010, a former test role with the Sauber F1 team and recently completing a deal to run with Andretti Autosport in the FIA Formula E Championship.

Gracie believes the opportunity for de Silvestro to cut laps and receive coaching from veteran Paul Morris will prove crucial ahead of their Bathurst 1000 debut.

“I met Simona for the first time on Tuesday which is one more thing we can tick off and it (the test) will be a good indication of how she adapts,” Gracie told Speedcafe.com.

“This is really helpful to have this opportunity and to have Paul to be able to talk to Simona. It seems minor now but I think it will pay off massively come Bathurst.”

De Silvestro is scheduled to receive her formal Bathurst preparations with a test in the Prodrive prepared Falcon at Winton from September 28-29.

A livery reveal for the de Silvestro/Gracie entry is expected in the coming weeks.