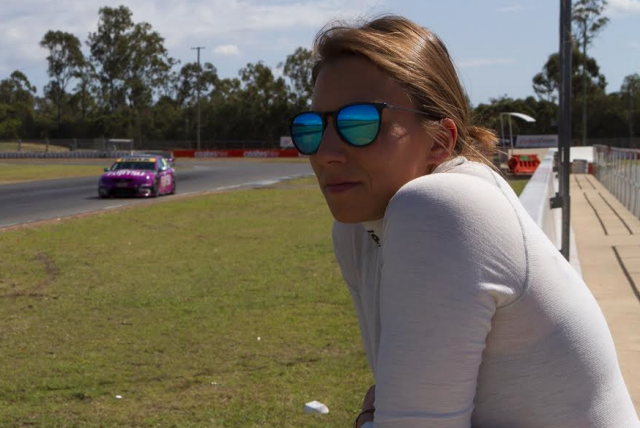 Simona de Silvestro compared stepping into a V8 Supercar to driving a road car for the first time after completing her initial laps at Queensland Raceway.

The Swiss-born driver took charge of Renee Gracie’s Dunlop Series Falcon as the duo prepare for the Supercheap Auto Bathurst 1000 from October 8-11 as an all-female wildcard entry.

De Silvestro logged 40 laps of the Ipswich circuit under the guidance of reigning Bathurst winner Paul Morris and Gracie.

Despite her lack of touring car experience, the 27-year-old part-time IndyCar racer adjusted without incident to the Falcon FG V8 Supercar.

The one-time Sauber F1 test driver had to familiarise herself with driving a right-hand-drive car for the first time.

“I got in the car and because everything is so different it felt like I’d never driven before, but it was fun to learn,” de Silvestro told Speedcafe.com. 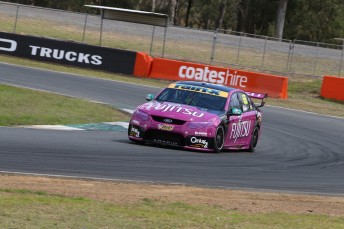 “It’s very different from an IndyCar or an open wheel race car that’s for sure which is what I have the most experience in.

“It’s pretty challenging because of the way you have to drive it, but I’m enjoying it and it has been a lot of fun.

“I managed to log a few laps and it got better and better every time I went out. For sure that is a positive but there is a lot left in me to get to where I want to be.

“It is really fast down the straight and that impressed me.”

De Silvestro found adjusting to the lack of aero grip and different braking technique as the biggest changes to adapt to.

“The biggest challenge has been learning where to brake and how to brake and the movement of the car,” de Silvestro said.

“The car moves around much more than any open wheel car and I think that is what I am struggling the most with at the moment.”

Mentor Morris was impressed by the way she adapted to the car given her limited knowledge of touring cars.

“When you look at what she has done in her career, she has operated at the highest level and she showed that here today,” Morris told Speedcafe,com.

“Their (de Silvestro and Gracie) goals are a bit different to everyone else as this is a two-year program.

“This first year is all about gaining some knowledge. They can definitely achieve what they set out to do and maybe a little bit more.”

While happy with her progress, de Silvestro admits next week’s Winton test in the Prodrive prepared Falcon FG X she will pilot at Bathurst with Gracie will be crucial for her preparations.

“Every time I get to be in the car its very important because every lap you learn something out of it,” she added.

“Tonight when I go to sleep I’m sure I will think about a few things I have learned today for the next test.

“It (the Winton test) is going to be really important.

“I’m really happy to have two days of testing as there is is a lot in me as a driver and also there is a lot to learn about how the car is working.

“I wish I had more (test) days but it is what it is and you have to work form there, but it would be better if I was driving every day.”