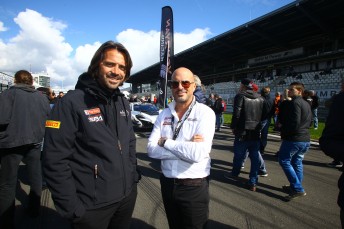 Blancpain GT Series boss Stephane Ratel and Tony Quinn are working towards hosting a global GT event at Hampton Downs in 2017 following a positive meeting at the Nurburgring.

The Australian GT Championship owner flew to the final round of the Blancpain Endurance Series last weekend to further discuss the possibility of working with Ratel’s SRO operation on a GT event at the New Zealand circuit.

Initial discussions with Ratel had indicated that a collaboration could be forged to host a race next year, but the availability of dates has now prompted a focus on 2017.

The format of the event remains unclear at this stage although the possibility of the race forming part of Ratel’s proposed Asia Pacific GT Endurance Series and the recently announced Intercontinental GT Challenge are among the possibilities.

“Working together was discussed quite a bit but the dates are not going to align for 2016, but 2017 is a strong possibility,” Quinn told Speedcafe.com.

“Stephane (Ratel) and Ben (Franassovici, SRO co-ordinator) have said they would love to come to New Zealand and they think it will be a great opportunity.

“We will continue to build on the base we have in Australia and work towards a global GT event in the future.

“I think we both want it (2017) to happen but there are a couple of things that would be helpful.

The Australian GT Championship has since revealed its 2016 calendars for its sprint and enduro series.