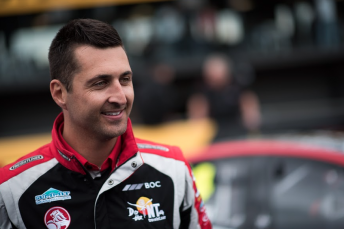 Fabian Coulthard has confirmed he will leave Brad Jones Racing at the end of the season.

The Kiwi has been the subject of silly season talk with speculation of a possible move to DJR Team Penske emerging at the Castrol Edge Townsville 400.

Coulthard, who is in the last year of his contract at the Albury team, has been evaluating his options since December last year.

However, the 33-year-old, who has recently purchased property on the Gold Coast, appears to be edging closer to finalising a deal for 2016 following his announcement on Fox Sport’s Inside Supercars.

“I haven’t signed anything yet I haven’t formalised anything, but I have let BJR know that I am going to move on,” said Coulthard, on Fox Sports Inside Supercars.

“There are other options besides that (DJR Team Penske) so I just have to evaluate everything and see what works best and what fits in the most.”

The admission comes shortly after reports emerged of the departure of his BJR Engineer Phil Keed to DJR Team Penske.

The New Zealander confirmed Keed’s departure, which he was only made aware of at the Wilson Security Sandown 500 earlier this month.

“Believe it or not, I was at Sandown,” added Coulthard.

“I had a blood nose that day and Kim (Jones, team boss) has walked into the truck … I had tissues hanging out my nose and what have you, and he said, ‘is this for stealing Phil, did someone punch you in the nose?’.

“I was genuinely shocked. I had no idea Phil was going.

“I knew he’d been approached by Triple Eight and Penske but to find out that way was pretty unique.”

Coulthard is hopeful that the news of Keed’s departure will not prompt a staffing structure change at Brad Jones Racing for the remaining rounds of the season.

“The day to day relationships within the team, hopefully nothing changes, we’ve got a job to do and that’s to do the best job I can in the Freightliner Commodore for the remainder of the year and we’ll go about the rest of it later on,” said Coulthard.