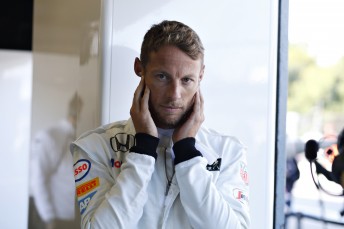 The odds are firming that Jenson Button will announce his retirement from Formula 1 at this weekend’s Japanese Grand Prix.

Fleet Street claim the 2009 World Champion will call time on his 16 season grand prix career on his own terms at Suzuka.

The timing would be fitting given that it is the home country of his wife Jessica and a land which has become a second home to the always upbeat star.

Button is being strongly linked to a key LMP1 drive in the FIA World Endurance Championship in 2016.

A veteran of 278 F1 starts, Button boasts the third longest F1 career in the sport’s history, which began with his debut in Melbourne with Williams in 2000, before spells at Benetton, Renault, BAR, Honda, Brawn GP and McLaren.

Button has remained tight-lipped on his future but hinted at last weekend’s Singapore Grand Prix that he is close to making a decision.

“My head knows but my mouth and tongue doesn’t know,” Button told the British press of his future.

The Woking squad, currently enduring one of its worst seasons on record, has an option to extend Button’s contract for another season, which expires at the end of the month.

Button stated a few weeks ago that he has no interest in joining another F1 team if he cannot stay at McLaren.

After a season mired by reliability issues, the 35-year-old admitted to losing his love for the sport after his fifth retirement of the season in Singapore.

“The joy of being in the car is only there if you’re fighting at the front, because you feel like you’re achieving something,” added Button.

“If you’re fighting near the back, you’re driving an F1 car, but you can easily get joy driving something else. The joy you get is from competing. It’s about fighting at the front.

“It’s about the possibility of standing on top of the podium. That’s the joy of F1.”

McLaren is expected to promote either Kevin Magnussen or Stoffel Vandoorne alongside Fernando Alonso for 2016 if Button calls time.