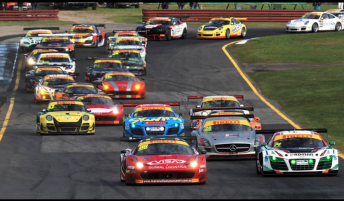 The Australian GT Championship has revealed its 2016 sprint and endurance series calendars.

The inaugural four round endurance series will begin at the Phillip Island Shannons Nationals meeting on May 27-29 with a double header round for both the endurance and sprint championships.

The traditional Phillip Island 101 format will remain as the headline feature.

Australian GT boss Tony Quinn has confirmed the second round of the championship will take place at Sydney Motorsport Park alongside V8 Supercars in August.

“V8s particularly wanted us to do an endurance round with them at Eastern Creek,” Quinn told Speedcafe.com.

“I’m not sure how it is going to work but we are willing to give it a go as long as V8s give us a fair crack of it.”

The Highlands Park final round will follow the same format as Phillip Island with the event hosting a three hour endurance race and a sprint championship round.

Meanwhile, the sprint series kicks off at the Clipsal 500 in March before hosting 4×30 minute races at the Australian Formula 1 Grand Prix at Albert Park.

The championship will rejoin the V8 Supercars bill for the Perth Super Sprint in May ahead of the double header round at Phillip Island.

A trip to the V8 Supercars Castrol Edge Townsville 400 will act as the penultimate round in July before the Highlands Park November finale.