Ryan Simpson secured the Australian Porsche GT3 Cup Challenge title at a packed Round 6 Shannons Nationals round at Phillip Island.

Simpson completed a clean sweep of victories with wins in Race 2 and 3.

It is Simpson’s maiden season in the Carrera Cup feeder series after two solid seasons in V8 Touring Cars.

The title was the second for Sonic Motor Racing after Sven Burchartz took the inaugural season in 2008.

Dylan O’Keefe was second overall and stormed from fourth to second in the title standings while James Abela finished third in the Pro Class.

Geoff Emery headed David Ryan and John Goodcare in the Elite division while the compelling Class B fight between Aaron Seton and Jaxon Evans continued to flow – Evans getting the upper hand by sealing the round victory.

Dial Before You Dig Super Six Touring Cars
Ben Grice completed a sweep by landing his ninth consecutive race and third round victories.

Ross retains a strong lead in the Super 6 title race however in defence of his title with double points on offer in the final round at Wakefield Park the title is far from decided. 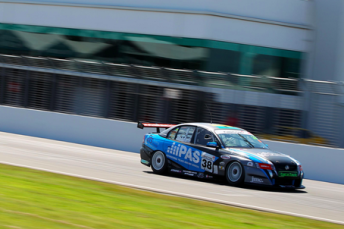 The West Australian teenager rebounded to second in the finale however with McAdam out front still lost ground in the series standings. 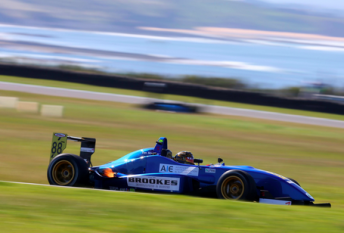 Tim Macrow has become the winningest driver in national F3 history after sweeping the round.

The weekend saw Macrow take the 30th and 31st victories of his career, eclipsing fellow double champion James Winslow at the top of the all-time winners list across more than 15 years of Australian F3 competition.

Macrow raced his way to the top in race two on Sunday morning, having started fourth on the reverse top-four grid.

In three laps he cut his way through title contenders Jon Collins and Ricky Capo and early leader Roland Legge to grab the win.

Collins trio of second-placed efforts at Phillip Island built his still-narrow title lead over year-long rival Ricky Capo to 19 points ahead of the final round at Wakefield Park next month.

Paul Scott won the National Class after early leader Nathan Kumar crashed out of the final race at turn one on the opening lap.

Australian Sports Racer Series
Mark Laucke has secured a pair of hard-fought race wins to claim the top step of the podium.

The victory comes after he was served a drive-through penalty in race one on Saturday for passing under the yellow flag in an attempt to redress, and sees him reclaim the championship lead.

Peovitis claimed not only second outright for the round, but also the SR2 Championship and F1000 Championship trophies to have his hands full on the podium.

Hughes, the mother of F3 racer Jon Collins – was ecstatic to take third overall for the weekend.

IROC Challenge/944s
Sven Burchartz and Greg Keene put on a show as they battled for round honourst.

Race 1 winner Burchartz won race two on Sunday morning however the tables were turned in the afternoon when Keene led for the duration.

The pair spent much of the fourth and most of the fifth lap side-by-side however Keene was able to hold on and grab the race win with Burchartz winning the round.

Rob Black finished third in IROC Challenge while Adam Mills scored two wins and a second to snare the Porsche 944 honours for the weekend.

Mills won Races 1 and 2 however had to cede the lead to Cameron Beller in the finale’ amongst the 14-car 944 group.
Chris Lewis-Williams finished third in the 944 class.

The pair finished second on the road to Neale Muston in the enduro race, however a post-race penalty for the multiple Radical champion dropped him behind the winning pair following the race.

Baird and Macrow won the round ahead of Muston and Smith, while Paddon headed home Oliver Smith and Kim Burke in SR3.

Russell Jaimeson won the Australian Superkart Championship by finishing second in the final race of the round.

Gary Pegoraro won the race, however wasn’t enough to retain the title he won last year.

The victory is Jaimeson’s second 250 international Australian Superkart Championship following his success in the category in 2013.

Jordan Ford won the 250 National title having gone through the season undefeated and 125 National was won by Mark Robin in a wild three-abreast sprint to the line.

The penultimate round of the 2015 Shannons Nationals will be held at Goulburn’s Wakefield Park Raceway from October 16-18.