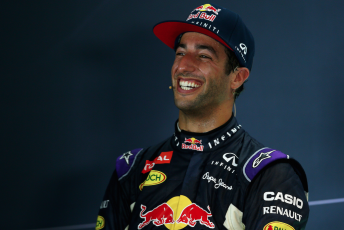 Daniel Ricciardo is confident his Red Bull has the pace to challenge for victory in the Singapore Grand Prix after recording a season best result in qualifying.

The Australian confirmed Red Bull’s impressive pace at the Marina Bay circuit by securing second on the grid behind polesitter Sebastian Vettel.

Although more than half a second shy of Vettel’s Ferrari, the 26-year-old believes he has a realistic chance to end Red Bull’s victory drought and claim a fourth career win.

“It (victory) is not impossible. I think we have put ourselves in the best position for it and if our long runs we did in practice are a sign then we have got a chance,” Riccardo told Sky Sports F1.

“I will be going for it. We haven’t been this far up the front for a long time so I will be trying to capitalise.”

Ricciardo’s run to second spot was one of several surprises in a qualifying session which saw Mercedes struggle for outright pace.

Ricciardo admitted he was shocked by Mercedes’ lack of speed after initially believing the Silver Arrows were sandbagging in Friday practice.

“I thought yesterday they (Mercedes) were playing around a bit creating some excitement but they are not where we thought they would be,” added Ricciardo.

“It is pretty crazy but I’m not complaining.

“We will see what they will do in the race but if this is an off weekend for them, then we have definitely got to make the most of it.”