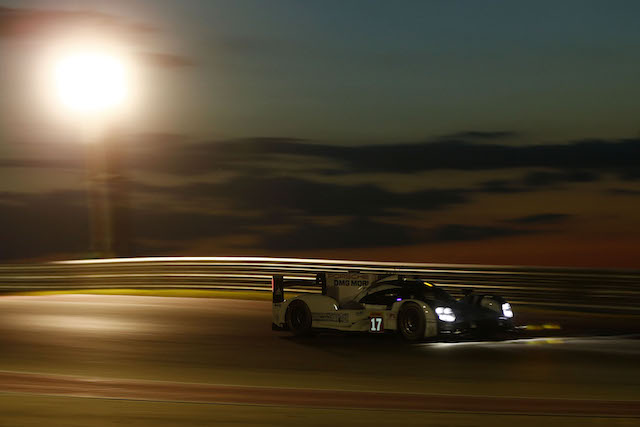 The Mark Webber, Brendon Hartley and Timo Bernhard Porsche has taken its second victory on the bounce after overcoming a one-minute penalty in Round 5 of the World Endurance Championship at the Circuit of the Americas.

Porsche’s #18 car driven by Neel Jani, Romain Dumas and Marc Lieb had seemed set for victory before it was wheeled into the garage from the lead with an apparent electrical issue with just over 30 minutes remaining in the six-hour race.

With Hartley aboard, the #17 Porsche took the lead before being summoned for a splash and dash with 25 minutes remaining.

Hartley took the chequered flag in a bitter-sweet result for the Weissach outfit.

The demise of the #18 Porsche was a free-kick for Audi which saw its #7 R18 e-tron quattro of championship leaders Marcel Fassler, Andre Lotterer and Benoit Treluyer finish second, just over one minute behind.

It means the #7 crew’s lead in the driver’s championship has been reduced by seven points to 10 over the #17 Porsche.

Toyota had a mixed bag with its #1 TS040 led home by Kazuki Nakajima in fourth place.

The #17 919 Hybrid had seized control for two-thirds of the six-hour race but its smooth run then encountered a couple of hiccups.

Webber had blasted past polesitter Jani for the lead going into the first corner after the start.

The #17 Porsche saw a sizeable advantage eroded away at the halfway mark when Webber overshot his pit stall.

The error cost Webber 25s with the gap reduced to seven seconds.

“All going super well except for my last pit stop. In this very wide pit lane I overshot our garage. No excuse,” Webber admitted.

However it then turned sour for the #17 when it was handed a one minute penalty for a pit stop infringement with just over two hours remaining.

Bernhard served the penalty and rejoined in second place, more than a minute behind the sister Porsche which in turn was called in for a routine pit stop.

The #18 had seemingly been en route to a certain victory before the electrical problem surfaced.

It rejoined the race with just under one minute remaining and was classified in sixth place of the LMP1 runners, 12th overall.

With less than three hours remaining the #8 Audi was handed a one-minute penalty for a pit stop infringement.

“It was for dropping a tyre. It was unbelievable because the guys were fantastic and rarely make a mistake,” Jarvis said.

A remorseful Mike Conway rued a mistake which saw him collect the fence in the #2 Toyota TS040 Hybrid which ended the run in the machine he shared with Alex Wurz and Stephane Sarrazin after 89 laps.

Porsche were also victorious in GTE Pro with Michael Christensen leading a 1-2 for the Zuffenhausen maker with Patrick Pilet second in the sister Team Manthey 911 RSR.

Full results 6 Hours of the Circuit of Americas results

Driver’s points after 5 of 8 rounds