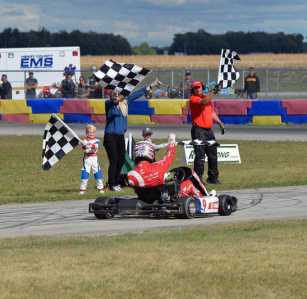 Brabham wound up third in the race which was won by four-times IndyCar Series champion Scott Dixon.

“(it) Felt so good to finally win the Dan Wheldon pro-am especially when Sebastian, Oliver and Suz are waving the checkered,” Dixon tweeted.

The karting challenge featured a host of IndyCar stars with proceeds raising money for the Wheldon Foundation, Alzheimer’s Association and the Wilson Children’s Fund.

More than $165,000 has been raised for the Alzheimer’s Association over the previous two years.

Wheldon was killed at the Las Vegas Motor Speedway in 2011 while Justin Wilson lost his life a day after being struck in the head by debris from a separate accident at Pocono last month.

Brabham appeared set for the win until his last lap tangle with Power. 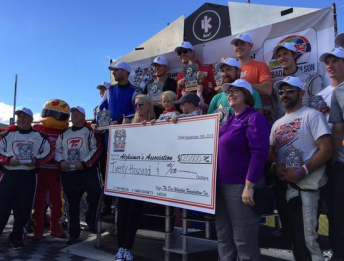 “I had a blast racing out there and having some fun with all the current IndyCar drivers,” Brabham told Speedcafe.com.

“It’s a great feeling to be out there competing for a cause supporting the Alzheimer’s Association, Dan Wheldon Foundation and Justin Wilson Children’s fund.

“I led most of the race and was looking strong.

“However on the last lap it turned into a dog fight.

“Power and I tangled going into the last corner and Dixon swooped around and got the win.

After a bad start Brabham fell back but quickly worked his way up to second behind Marco Andretti.

“Marco was leading so I started bump drafting with him to get away,” Brabham said.

“The group behind us teamed up and also bump drafted to catch us back up.

“When they caught us I passed Marco and pulled out at gap on the rest of them.”

The charity event also marked the return of James Hinchcliffe after suffering horrific injuries in the lead-up to the Indy 500 in May.