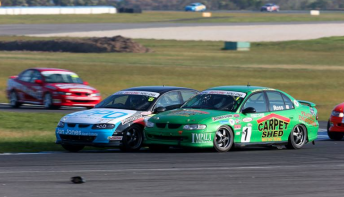 Ben Grice extended his run of Super Six Touring Car wins to seven after coming through a thrilling race at the sixth round of the Shannons Nationals at Phillip Island.

The son of touring car legend Allan Grice capitalised on a mistake from race leader and series rival Gavin Ross at Turn 4 on the final lap.

Grice was then involved in a drag race with Ross to the chequered flag taking the win by just 0.09s.

The encounter proved to be a thrilling contest throughout with a five car train featuring Grice, Ross, Travis Lindorff, Simon Tabinor and Garry Hills fighting for the lead in the early stages. 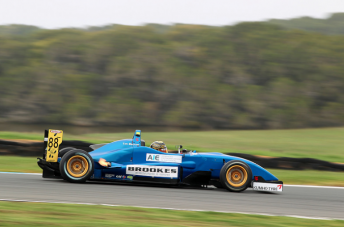 Tim Macrow on his way to victory

Ross had moved into a relatively healthy position as the race progressed but his final lap mistake was to prove costly.

Lindorff managed to hold off Tabinor for the final spot on the podium.

Former two-time Australian Formula 3 champion Tim Macrow made a triumphant return to the championship as he took victory in the opening race of the weekend.

After dominating qualifying to claim pole position, the Victorian, piloting an Alpine Motorsport Dallara, was unable to convert his grid slot into the lead at the start.

However, Macrow quickly recovered to slipstream Jon Collins for the lead at the start of the second lap.

Collins kept the pressure on Macrow throughout but was unable to prevent the 2007 and 2013 Australian F3 champion from taking the chequered flag.

A second place finish for Collins has seen his championship lead over Ricky Capo grow to 15 points. 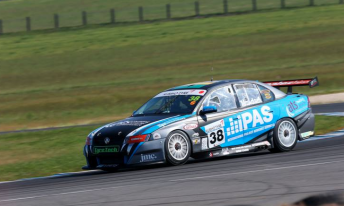 Capo came home in third just ahead of Roland Legge.

Eggleston Motorsport’s Liam McAdam secured his third win of the season to extend his lead in the Kumho V8 Touring Car Series.

McAdam led home title rival Alex Rullo, who had won the last four races in the series, to open up a 13 point lead over the 15-year-old rookie. 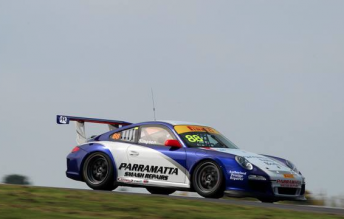 The Paramatta Smash Repairs driver signalled his intentions in qualifying after claiming pole position by 0.9s.

Simpson made no mistakes as he surged to the chequered flag with more than a six second margin over Dylan O’Keefe.

Geoff Emery fended off a hard charging James Abela for third, while Aaron Seton, son of touring car great Glenn, took the honours in Class B from Jaxon Evans.

Macrow picked up his second win of the day as he and Neale Muston shared the spoils in the two Radical Australia Cup sprint races. 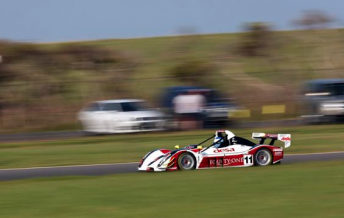 Tim Macrow doubled up in the Radical Australia Cup

Muston dominated the day’s earlier eight lap contest to take the win from Baird and Smith.

Burchartz and Keene were locked in a thrilling scrap in the early stages before the former managed to open up a healthy lead, which he maintained until the flag.

Adam Mills was the first of the Porsche 944 cars home to secure the final podium spot. 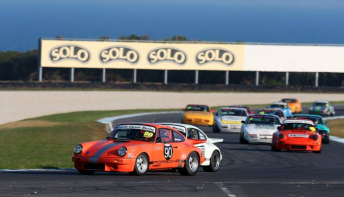 Stoeckel pipped Aaron Steer in the run to the chequered flag after the pair managed to successfully avoid Jason Makris, who spun out of the lead on the final lap.

Adam Cranston, Mark Laucke, Makris and Stoeckel all enjoyed spells in the lead of the race which was interrupted by the Safety Car at the start to retrieve the stalled Phil Hughes on the grid.

The 2013 champion took the win from Gary Pegoraro while Matt Bass scythed his way through the pack to claim the final place on the podium.

However, an eighth place finish for Anton Stevens saw him lose the lead in the championship standings.

The sixth round of the Shannons Nationals at Phillip Island continues on Sunday.

Speedcafe.com will broadcast all the action via a live stream service.