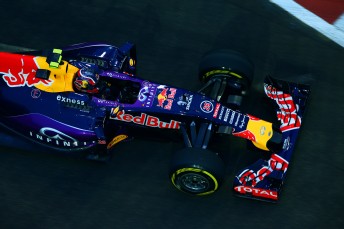 Red Bull showed signs of a resurgence as Daniil Kvyat topped the times in Friday practice ahead of the Singapore Grand Prix.

The Russian recovered from a fuel system issue in the opening 90 minute hit-out to post the fastest time in Practice 2.

Ricciardo had topped the second practice session early on while running on the soft compound tyre.

After recording a one-two in Practice 1, Mercedes struggled for outright pace compared to its rivals in the day’s final session.

Reigning world champion Lewis Hamilton was fourth fastest 0.337s adrift of Kvyat, while Nico Rosberg could only manage a time good enough for seventh, behind the Ferrari of Sebastian Vettel and Force India’s Sergio Perez.

Fernando Alonso gave McLaren some encouragement in eighth ahead of the second Force India of Nico Hulkenberg and Toro Rosso’s Max Verstappen.

Williams’ Felipe Massa emerged in 11th spot fractionally in front of the Sauber duo of Felipe Nasr and Marcus Ericsson, with Jenson Button in 14th position.

Carlos Sainz’s Friday practice was hampered by a puncture after he brushed the wall at Turn 5.

The Spaniard ended the day in 15th spot ahead of Romain Grosjean, Valtteri Bottas and Pastor Maldonado.

Manor endured a difficult day which began with new signing Alexander Rossi suffering a crash at Turn 18, which brought out the red flags at the end of Practice 1.

The damage incurred to the car saw the American join Practice 2 late.

While mechanics repaired Rossi’s car, Will Stevens damaged his Manor when he made contact with the wall at Turn 11 early in P2.