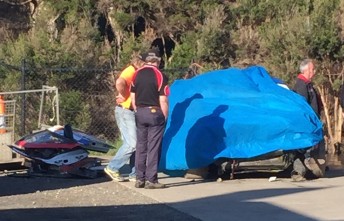 A passenger has been airlifted to hospital following a crash during a V8 Touring Car ride session at the Phillip Island round of the Shannons Nationals this afternoon.

Palmer was admitted to the circuit’s medical centre before being released while his passenger was conscious when emergency crews arrived at the scene.

However it is unclear as to the extent of his injuries.

Palmer posted a comment on his Facebook page that the brake pedal had allegedly gone to the floor.

“Well that was (a) bad head on into a tyre wall at around 180km/h and that worst part is I had a passenger,” Palmer wrote.

“I just hope he is okay. It is a bad feeling hitting the brake pedal and it goes to the floor.”

“A V8 Touring Car driver was involved in an accident during the passenger rides session today at the Phillip Island Grand Prix Circuit,” the statement read.

“The passenger involved has been airlifted to hospital following the accident at turn four. He was conscious when removed from the vehicle.

“The driver involved was checked by the medical team at the circuit medical centre and released.

“Further updates will be provided when appropriate and pending further investigation into the incident.”