Morris: Stadium Trucks scared the hell out of me

Morris: Stadium Trucks scared the hell out of me 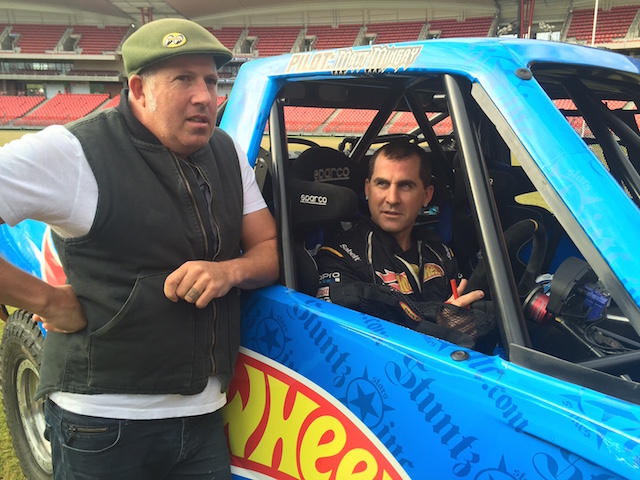 Touring car veteran Paul Morris said he ‘screamed like a child’ during a stunt to promote the Sydney leg of a two-event Stadium Super Trucks series.

Morris was strapped in as a passenger in Matt Mingay’s stunt truck which propelled over a jump at Spotless Stadium, the venue for the Stadium Super Trucks in Sydney on October 31.

Both Morris and Mingay are the first Australians to sign up for the Super Trucks which will make their debut at the Castrol Gold Coast 600 from October 23-25.

There will be five Australians going up against a similar number of Americans lead by Stadium Super Trucks founder and operator Robby Gordon.

“I have done some serious stuff throughout racing and away from the racetrack, but I have to tell you, I seriously s..t myself,” Morris said.

“I am never a good passenger and I always knew that Matt (Mingay) would put in a bit extra to get me fired up, but that was crazy.

Morris, an experienced helicopter pilot, admitted that being inside the Super Truck with Mingay put the fear of god into him.

“I have been in helicopter crashes that didn’t scare me as much,” he exclaimed.

“I have been through the air in a car before, but never on purpose.”

Morris did three jumps and was still shaking 20 minutes after the experience.

“I was so keen to get a deal together when I saw Stadium Super Trucks were coming back to Australia and especially with the chance to race in at Spotless Stadium, Sydney Showground on dirt on October 31.

“Now, I’m thinking; ‘what the hell have I signed up for?’

“But I have to say I cannot wait for my Supercheap Auto truck to arrive from the US so I can get in and have a burn.

“I guess it is all about facing the fear and getting on with it. The fans are seriously going to go nuts with this stuff.”

The Stadium Super Trucks arena event will include a full entertainment package with some of Australia’s leading extreme athletes competing.

Tickets for the one-night only event start at $44 and are available from Ticketek.com.au by following this link http://bit.ly/1Ns3lyT