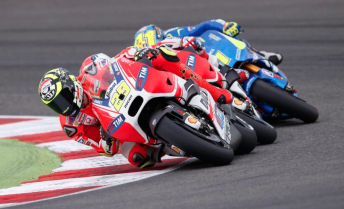 Andrea Iannone intends to compete at next weekend’s Grand Prix of Aragon despite dislocating his shoulder for the second time this season.

The factory Ducati rider initially dislocated his left shoulder in a testing crash at Mugello in May, but has since repeated the injury in a running accident this week.

Iannone has since undergone an MRI scan at a hospital in Vasto, Italy where his shoulder was popped back into place.

The 26-year-old, who will be fit enough to race at Aragon, has confirmed he will undergo surgery on the injury after the November season finale at Valencia.

“It hurts a lot, it’s as if I have only one arm,” Iannone told Italian newspaper Gazzetta dello Sport.

“It’s now certain that at the end of the season I will have to have surgery.”