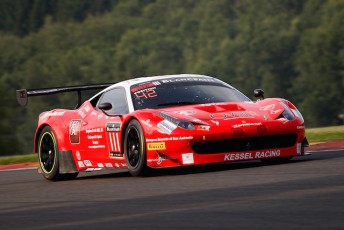 The Brisbane driver will once again join up with the Kessel Racing squad to drive the team’s #111 Ferrari 458 GT3 for the final round of the Blancpain Endurance Series.

Competing in his maiden season in the high profile European GT series, Talbot heads into the round as a contender to take out the Amateur Cup championship.

“It’s a welcome surprise to arrive at the Nürburgring with a chance for victory in the Amateur Cup championship. We’ve got nothing to lose so I’ll be giving it 100 percent,” said Talbot.

“I came into 2015 with only two years racing experience (and) we made the decision to take on the Blancpain Endurance Series with the thought to simply learn and improve as the year went on.

“We’ve had an up and down season starting with a win at Monza followed by a DNS at Silverstone yet we’ve far exceeded our expectations for the year and I’ve learnt a huge amount.”

Talbot will be joined at the event by V8 Supercars star Shane van Gisbergen who will pilot the #58 Von Ryan Racing McLaren 650S alongside Rob Bell and Frenchman Kevin Estre.