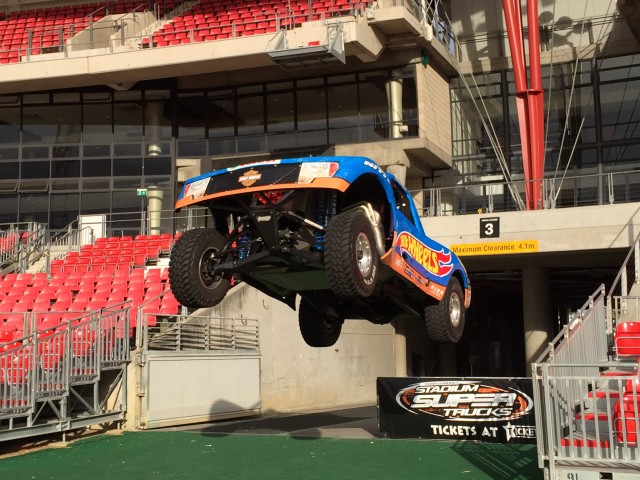 Action athlete Matt Mingay hopes that competing in the upcoming Australian Stadium Super Truck tour will help him break into racing in the United States.

Mingay, along with reigning Bathurst 1000 champion Paul Morris, have previously been confirmed for the Australian Stadium Super Truck Series at the Castrol Gold Coast 600 from October 23-25 and at Spotless Stadium at Sydney Olympic Park on October 31.

The Sydney event stands as the first time the Charlotte, North Carolina-based SST series founded and run by Robby Gordon, will be unleashed in an arena environment outside of North America.

Mingay had his first taste of the Super Trucks when the entertaining machines captivated the crowd at the Clipsal 500 earlier this year.

He is pinning his hopes that a decent result at the Sydney event will enable him to have a shot at the series in America.

As previously reported, Gordon had offered Mingay a chance for a one-off tilt at an event at Las Vegas shortly after the Sydney show. 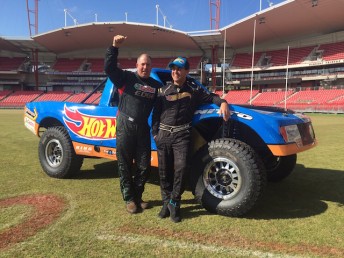 Mingay (Castrol-backed Hot Wheels truck) and Morris are the first Australians in a 10-truck field that will comprise an equal number of domestic and American drivers.

“The Sydney Stadium Super Truck event is going to be insane,” said Mingay, who was Tom Cruise’s stunt double in Mission Impossible II.

“I am under no illusion that this is my shot at a regular international drive on the US tour. I will be doing whatever it takes to win.

“Stadium Super Trucks is serious, hardcore racing and the fans are going to love it. Basically there are no rules and that suits guys like me and The Dude (Morris).

“If the crowd thought these things were impressive in Adelaide, wait until 10 of them are locked inside Spotless Stadium at Sydney Showground, racing on a dirt track and jumping three storeys high.”

Infrastructure to transform Spotless Stadium for the gravity-defying trucks includes the grooming of 6500 tonnes of dirt.

Gordon, who cut his teeth as an IndyCar racer in the 1990s before moving to NASCAR and serious offroad racing, believes that Mingay has what it takes to be a successful full-time competitor.

“He (Mingay) did a hell of a job in Adelaide and I think has proven already he has what it takes,” Gordon said.

“His test will come on the stadium dirt in Sydney against a full field of racers that drive Stadium Super Trucks all the time, but I cannot see any reason why Matt and someone with the experience and aggression of (Paul) Morris can’t be up the front racing for the win.”

The Sydney event, promoted by Nine Live, comes after the SST machines engage in races which includes launch ramps at the Surfers Paradise street circuit.

The 600bhp trucks are capable of speeds in excess of 200km/h and provide highly animated handling.

The Stadium Super Trucks will be backed up by a full entertainment package with some of Australia’s leading extreme athletes to be on display.

Tickets for the one-night only Sydney event start at $44 and are available from Ticketek.