The two Prodrive Falcons were locked together throughout the Sandown 500

Race winner Mark Winterbottom has revealed that he ignored team orders during a crucial moment in the Wilson Security Sandown 500.

Running fourth, Winterbottom had been on the rear bumper of team-mate Chaz Mostert when Alex Buncombe’s Nissan went off at Turn 9 on lap 75 of 161, triggering a Safety Car.

Exiting the final corner as the full course yellows were called, Mostert elected to stay on the circuit for another lap, while Winterbottom ignored an instruction to stay out and dived in.

Had Winterbottom followed Mostert in continuing for the extra lap, he would have had to double-stack behind his team-mate in the stops.

Sitting behind Mostert during the #6 Ford’s 15 second fuel fill would subsequently have dropped Winterbottom to around 10th place ahead of the restart.

Winterbottom’s quick thinking instead allowed both Fords to retain their previous positions in the order behind the leading Holdens of Jamie Whincup and Shane van Gisbergen.

“I got told to go around, so I went against team orders to come in,” Winterbottom told Inside Supercars.

“I almost hit the fence (at the pit entry due to the late decision). I got told to go around thinking that Chaz would bail in and when he didn’t I drove in.

“Little things like that, there’s 150 points on the table if you get that wrong. Thankfully we got away with it.”

Mostert had been held up by Van Gisbergen at Turn 4, allowing Winterbottom to pass his team-mate down the outside on the back straight.

“It’s about pit strategies and priorities whenever you’re racing your team-mate,” said Winterbottom.

“Chaz went for the move (on Van Gisbergen) and had a little lunge (into Turn 3). I knew he (Van Gisbergen) wasn’t going to give in so I slotted in behind.

“There’s always one moment of the race that can completely change the outlook at that was it for me.”

Later clearing Van Gisbergen when the Kiwi made an error, Mostert chased Winterbottom hard in the closing laps but resisted the temptation to have a lunge for the win.

Winterbottom was meanwhile scathing of a $3,000 fine he received for a post-race burnout, which broke rules prohibiting such celebrations from being performed prior to Turn 1.

With Sandown’s spectators largely positioned on the straight, Winterbottom was unapologetic over his actions.

“The crowd loved it, I could hear them cheering on,” he said.

“If the Ford fans loved it in the stands it was worth every cent. 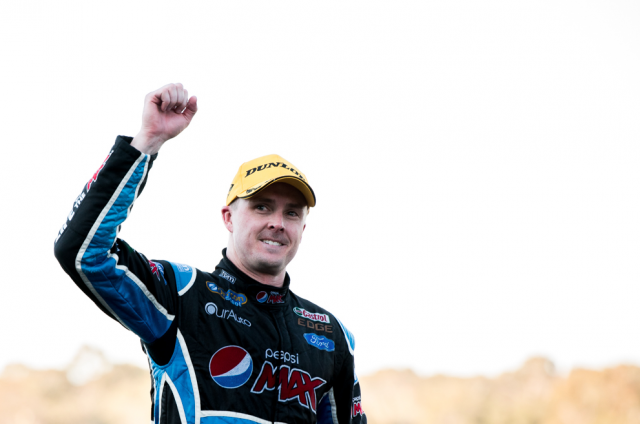