The Team 18 Holden leading a train of cars at Sandown

The Frenchman returned to the category for the first time in three years at last weekend’s Sandown 500, finishing seventh alongside Lee Holdsworth in the #18 Walkinshaw Racing Holden.

Although a drama filled strategy race, Sandown served to underline the difficulty of passing in the current field, where car performance is more closely matched than ever before. Bourdais, who splits his time between IndyCar and United SportsCars, proved competitive among the co-drivers, but was one of many to note how difficult pulling off passes has become in V8 Supercars.

The category’s Commission is currently assessing its tyre compound options for next year, with soft rubber expected to be used more frequently.

The ex-Formula 1 driver however feels that the rear wings, which have progressively become larger and positioned further back since the advent of the Car of the Future, are also hurting the racing.

“If they want to see more passing with these cars you need smaller wings and wider tyres,” Bourdais told Speedcafe.com when asked for his insight into how the racing can be improved.

“The cars need more mechanical grip because as it is now there’s nothing to lean on.

“Unless you’re a second and a half faster you’re not going to dive down the inside because you’re never going to stop the car.

“Either you use the bumpers and shove people out of the way or you hold station because there is no way by. 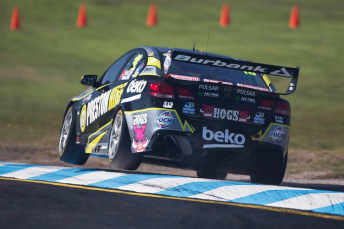 “The (Sunday) race was worse than Saturday because the track temp was higher and the grip went down. It was just about surviving rather than attacking the track.

“With these cars, as long as the braking zones are, you need more mechanical grip to be able to commit to a corner and a pass. You’re just trying not to make a mess of it.

“The tyres don’t even wear, they just overheat because they’re sliding all the time.”

Bourdais spent the majority of his two stints in the 500 stuck behind David Russell’s Nissan, which proved difficult to follow closely through the high-speed Turn 6.

“Behind the Nissan with that massive rear wing they’ve got, you just can’t hold the car due to the aero disturbance,” he continued.

“It’s like being in a washing machine. I killed the tyres behind that thing.

“It’s funny, you wouldn’t think that it’s so sensitive (to aero), but you have a little bit of downforce and a very little bit of mechanical grip.

“If you take out that (front) downforce (due to following another car closely), you’re all over the place.”

Bourdais was critical of his own performance at Sandown, but leaves Australia encouraged with the speed that Holdsworth and the team showed ahead of Bathurst.

“I haven’t been at the level that I’d want myself to be but I did a lot of miles and learnt quite a bit,” he said.

“I kind of wish the first one had been the Gold Coast because it would have been easier to find my ground a bit and do Bathurst at the end.

“But I’m just glad there was a race before Bathurst because that is the big piece to learn and there’s not much room for error. I’m definitely looking forward to it, but I know it will be tough.

“It’s not an easy place, but it’s going to be fun. I can prep quite a bit looking at onboards and data. There’s a bit of work to be done.”