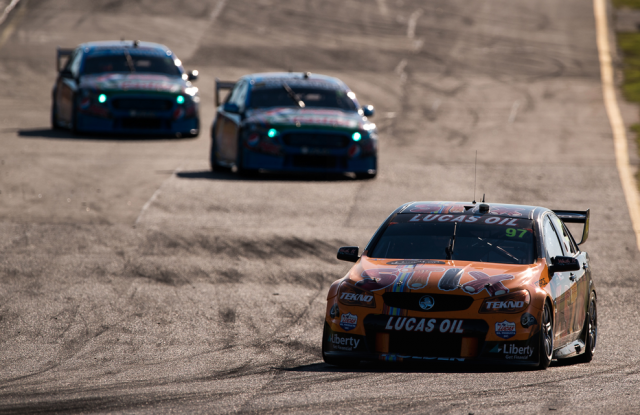 Shane van Gisbergen declared Tekno Autosports back in business after a return to form at Sandown netted the team its first podium in 18 races.

The result followed a troubled three events that saw the early title contender plummet to ninth in the standings.

Tekno’s poor run of results followed the debut of a new chassis at Hidden Valley which, while performing strongly at the high grip Darwin venue, proved troublesome elsewhere.

Van Gisbergen and co-driver Jonathon Webb finished both qualifying races at the Melbourne venue in the top five, before combining for a third place finish on Sunday.

The result has both drivers confident they can contend for the win at Bathurst, where they appeared in the box seat for victory last year before a late stall and starter motor failure ended their chances.

A return to form is timely for the team, which is currently in the throws of locking down a replacement driver for the Triple Eight-bound Van Gisbergen next year.

“Just being on the podium is awesome after the last few rounds we’ve had,” Van Gisbergen said.

“Full credit to the team, they did such an awesome job turning things around.

“We had a massive test day last week, it was good to get a feeling back in the car where I was happy. I came here and it was back to normal, going back to how we used to.

“From a team point of view we’ve been really struggling, going backwards every race and to be able to push on with these guys (Prodrive), it’s good to be back.

“Having that confidence back in the car heading to a track like Bathurst is such a good thing to have.”

Van Gisbergen led the race as the final pitstops approached, but could not hold off the Prodrive Fords of Mark Winterbottom and Chaz Mostert.

The two Pepsi Falcons then drove into the distance following the final Safety Car, pulling nine seconds on the Holden over the final 26 laps to the flag.

“They were pretty impressive,” he said of the Prodrive FG Xs.

“When I was saving fuel I was able to keep Chaz behind and Mark wasn’t too far ahead, so I thought maybe we had a shot.

“But after the Safety Car I didn’t have as much grip and I was struggling with my brakes a lot, the pedal going to the floor.

“It was pretty tough, but for us we were back in the hunt and I could see them again. Now we can focus on improving our car up to their speed instead of just trying to get back competitive again.”

The Kiwi also had a cheeky swipe at David Reynolds, who had been placed fourth in Prodrive’s third entry before a charging Garth Tander took the place and set out after the final podium spot.

“I was fine until he (Tander) got in front of Reynolds because Reynolds is never going to pass you, but Garth is pretty aggressive, he’d dive-bomb you for 80th,” dead-panned Van Gisbergen.

“I was watching the mirror and waiting for the big move. It never came, but he put a lot of pressure on. The focus was on him for the last 10 or so laps.” 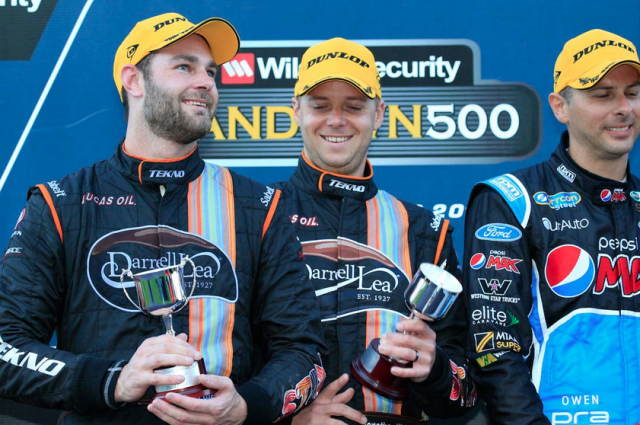 Van Gisbergen and Webb on the Sandown podium

Next Story POLL: Which co-driver impressed you most?