POLL: Which co-driver impressed you most?

POLL: Which co-driver impressed you most? 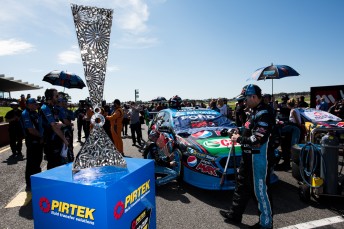 The Pirtek Enduro Cup on display at Sandown

This week’s Pirtek Poll asks; Which co-driver impressed you most at the weekend’s Wilson Security Sandown 500?

As is tradition, the Melbourne event provided the first look at the endurance line-ups in competitive action ahead of next month’s Supercheap Auto Bathurst 1000.

At the end of the 161 laps, Steve Owen took the winner’s trophy alongside Mark Winterbottom, securing the second V8 Supercars Championship race victory of his career.

The result came despite the fact that the 40-year-old didn’t look entirely comfortable in either the qualifying race, where he struggled with a braking imbalance, or the early stages of the 500.

“I had a bit of a shocker in my second stint (on Sunday),” he admitted post-race.

“I chased the roll-bars trying to catch the #1 car (Paul Dumbrell) and probably should have done what Frosty did and just continued on with the piece that I had.

“Hopefully the car is a bit sharper at Bathurst.”

Second place finisher Cameron Waters was, however, in fine form, setting up a potential win for Chaz Mostert by cutting through the pack during his second stint.

The youngster’s pace, which saw him rise from 10th to fourth in 20 laps, was enough to ensure the #6 entry leap-frogged its sister car in the subsequent stops.

The only blots on Waters’ copybook were a mistake at Turn 9 on the opening lap of the co-driver race which dropped him from first to fourth and an off-track excursion at Turn 2 late in his stint on Sunday.

Former full-timer Webb combined with Shane van Gisbergen to finish third in what was just his second competitive motor race of the year.

After a series of small errors in the Saturday sprint, the Tekno team owner put in a fine drive on Sunday to chase down leader Paul Dumbrell by the end of the minimum co-driver laps.

Dumbrell was in untouchable form for much of the weekend, moving from third to first in the opening two laps on his way to victory in the co-driver sprint.

He led through the co-driver stints on Sunday, but only narrowly held off Webb as he struggled with tyre life as the pitstops approached.

Elsewhere, Dean Canto was his usual dependable self for Prodrive, while Walkinshaw quartet Warren Luff, Tony D’Alberto Sebastien Bourdais and Russell Ingall were also rewarded with top 10 finishes for their strong efforts.

Reindler earlier rose from 13th to 10th in the co-driver race, banging doors with IndyCar ace Bourdais in the process.

Which co-driver’s performance caught your eye at Sandown? Cast your vote on the Pirtek Poll below.