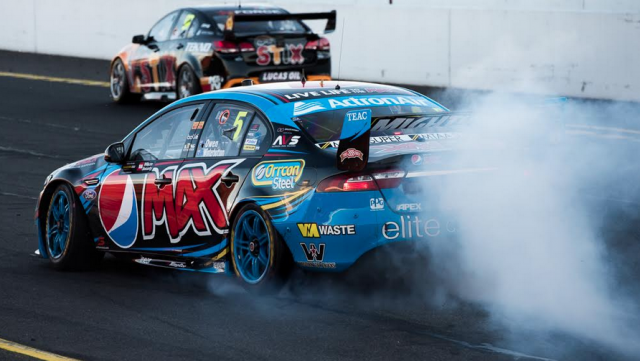 Mark Winterbottom has been fined for this burnout

With burnouts not allowed to be performed until after Turn 1 for safety reasons, Winterbottom breached the post-race regulations by celebrating on the front-straight.

The Pepsi Max Ford came to a near stop off-line on the run down to Turn 1 before Winterbottom entertained the front-straight crowd with his tyre frying antics.

Winterbottom’s fine is the only post-race penalty from a Sandown 500 largely devoid of incidents.

The Scott McLaughlin/Alexandre Premat Volvo received the only in-race penalty, copping a drive-through for ‘failing to ensure that a pitstop was carried out safely’.

Premat was signalled to leave his pit box with the air spike still attached, breaking the hose as the Volvo pulled away.

Earlier in the weekend, Marcos Ambrose received a $5,000 fine for performing a practice start in Friday afternoon’s ride session.