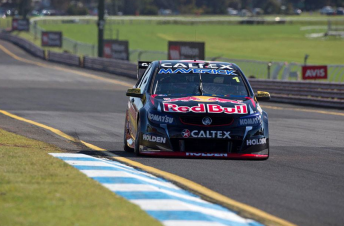 Jamie Whincup led the way in the morning warm-up

The Red Bull driver ran a best of 1:08.93s in the early stages of the 20 minute session that remained at the top of the order until the end.

Whincup completed the bulk of the driving as the team evaluated overnight set-up changes aimed at matching the outright speed of Prodrive’s Fords.

Mark Winterbottom let co-driver Steve Owen undertake the early running in the #5 Ford before jumping in and going second fastest.

The Lee Holdsworth/Sebastien Bourdais Holden ended up third thanks to an early time from the Australian, who promptly handed over to the IndyCar star.

The session included the second red flag of the weekend. As was the case on Saturday morning, the stoppage was caused by an off from Dale Wood, this time at Turn 9.

Andre Heimgartner’s Ford and Jack Perkins’ Holden returned to the track following their big hit in the primary driver sprint on Saturday.

Heimgartner endured an early off at Turn 1, but reported no repeat of the right-front brake caliper leak that caused the crash on Saturday.

“It’s definitely nice having brakes this morning,” he said after ending up 24th.

“I’m just getting my confidence back up and trying to tune the car. We’ve been struggling with it all weekend.”

The Wilson Security Sandown 500 will kick-off at 1325 local time.