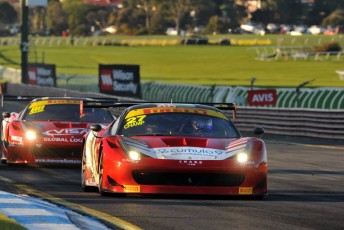 The Trass Family Motorsport Ferrari of Jono Lester and Graeme Smyth has been stripped of its second place finish in the opening Australian GT race at Sandown.

Stewards handed the Kiwi Ferrari 458 entry a 26 second penalty for a pit lane infringement which demoted Lester and Smyth to eighth position.

As a result of the penalty, the Erebus Motorsport Mercedes SLS GT3 of Morgan Haber has been promoted to second spot with the Christopher Mies/Ryan Millier Jamec-Pem Audi R8 now credited with the final place on the podium.