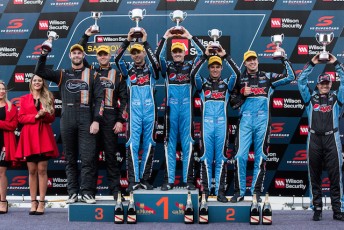 The Winterbottom/Steve Owen entry took the flag narrowly ahead of the Chaz Mostert/Cameron Waters sister car, extending Winterbottom’s championship lead in the process.

The result is the second Sandown 500 win for Winterbottom and the first one-two in an endurance race for Prodrive.

Red Bull’s Jamie Whincup/Paul Dumbrell Holden led the majority of the race before a dire fuel equation saw the team elect to pit with 50 laps to go, committing to an extra stop.

Any hopes of recovery were then quashed when Whincup was back into the pits with a puncture just moments later, resigning the two-time defending winners to an eventual 15th place finish.

Fuel was a major factor in the back half of the race, with the first Safety Car on lap 75 – caused by an off from Alex Buncombe – throwing planned four-stop strategies into serious question.

A subsequent second yellow on lap 131, this time for debris, then eased the pressure on economy for many of the front-runners, allowing them to make it home without an extra splash.

The two Prodrive Fords had waged their own race-within-a-race throughout the day under the ever present threat of a Safety Car forcing them to double-stack in the pits, which would have destroyed the trailing car’s race.

A slow start saw Waters drop from third to fourth behind Dumbrell, Owen and Webb, before the #6 ran a long first stint and took on extra fuel at its first stop.

Rejoining 10th as a result, Waters charged back through to fourth in his second stint and, with a shorter second stop, managed to leap-frog the Owen/Winterbottom entry.

The timing of the lap 75 Safety Car then proved a stroke of luck as Winterbottom was able to dive in as the yellow was called, while Mostert continued for another lap at full speed before making his stop and rejoining still ahead.

The positions of the #6 and the #5 would be reversed again, however, on lap 110, when Mostert lost out to Winterbottom while trying to take second from Van Gisbergen.

Winterbottom then jumped the Tekno Holden during the final round of stops with little under 40 laps to run, combining with Whincup’s misfortune to see the #5 Ford take the lead for the first time all race.

Mostert would stay behind Van Gisbergen until the Kiwi made a mistake with 30 to go but, despite the subsequent Safety Car allowing him to close the gap to Winterbottom, there would be no late heroics.

Outside the top five, the Tim Slade/Tony D’Alberto and Lee Holdsworth/Sebastien Bourdais Walkinshaw crews proved solid throughout on the way to sixth and seventh respectively.

Scott Pye fought through to 12th after Marcos Ambrose dropped to the back off the line having erroneously attempted the start in neutral.

Craig Lowndes/Steven Richards never truly recovered from their rear-of-grid start, also committing to five stops during the mid-race scramble for economy on their way to 13th.

Scott McLaughlin/Alex Premat were 14th after dropping a lap early with a bungled pitstop that saw the car leave its bay with the air spike still attached.

Andre Heimgartner had been the only primary driver to start the race, combining with Ant Pedersen to eventually finish 17th.

Will and Alex Davison ran in the top 10 for the majority of the day until mechanical issues sent the #9 Erebus Mercedes to the garage.

The Nick Percat/Oliver Gavin Holden was the only retirement, falling foul of steering failure.