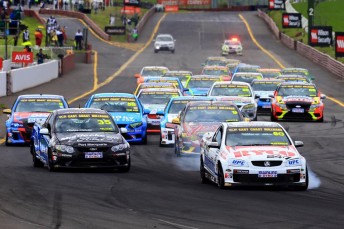 Gerard McLeod claimed his maiden V8 Utes round win with a lights-to-flag victory in the final race of the Sandown 500 weekend.

The Victorian was never headed in a hotly contested encounter as he fended off Andrew Fisher in a race long tussle.

McLeod’s hopes were dented when the Safety Car was deploy midway through the race to recover Ben Grice, who was punted into the Turn 9 gravel trap by Jeremy Gray.

Despite the interruption, McLeod judged the restart to perfection to retain his lead over Fisher which he maintained to the chequered flag.

Championship leader Ryal Harris held third for the majority of the race, but the Gold Coast driver lost the position to George Miedecke shortly after the restart.

Harris tried to fight back but Miedecke went on to secure the final spot on the podium.

However, there was drama for title contender Adam Marjoram as a mechanical issue saw him come home in a lowly 23rd position.

McLeod and Fisher finished the meeting tied on points but the former’s victory in the final race gave him the round win.

The V8 Utes return to action at the Supercheap Auto Bathurst 1000 from October 8-11.