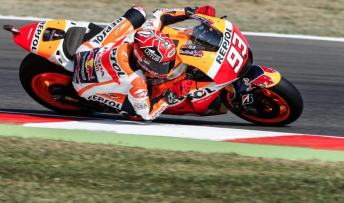 Beginning under threatening skies, showers hit in the early stages forcing riders to switch to wet setup bikes before conditions changed and a drying track prompted the field to return to dry weather machines.

Profiting from the changeable conditions, Marc VDS Honda’s Scott Redding, who remounted after a crash in the early laps, recovered to score his maiden MotoGP podium in third.

Polesitter Lorenzo had led the proceedings initially from Marquez and then Valentino Rossi after the bike switch, before then losing the lead to his title rival team-mate with 17 laps remaining.

As a dry line appeared third placed Marquez dropped back from the fellow wet tyre shod Rossi and Lorenzo.

Losing pace, Marquez elected to pit to change to his dry bike before the Yamaha duo, allowing him to regain the lead, which he held until the chequered flag.

With Rossi in his sights, Lorenzo was next to blink as he switched to his dry bike before his opposite number.

However, the former double world champion’s title and victory hopes took a hit when he crashed out with seven laps to go shortly after his trip to the pits.

The Spaniard walked away from the incident but has since undergone scans on a suspected right hand injury.

Loris Baz was rewarded for his early switch back to the dry weather bike as he brought the Forward Yamaha home in fourth after losing out to Redding in the closing laps.

The late bike change for Rossi saw the nine-time world champion finish fifth missing out on a podium finish for the first time this season.

Virtue of Lorenzo’s retirement, the Italian has crucially opened up a 23 point lead in the world championship.

Pramac Ducati’s Danilo Petrucci finished in sixth ahead of the factory Ducati riders of Andrea Iannone and Andrea Dovizioso.

Honda’s Dani Pedrosa had occupied fourth early in the race but the visits to the pits saw him drop to ninth, while Suzuki’s Aleix Espargaro completed the top 10.

Australia’s Jack Miller rode as high as seventh courtesy of his early switch back to his dry setup LCR Honda, but in the closing laps he dropped to 12th position behind team-mate Cal Crutchlow.