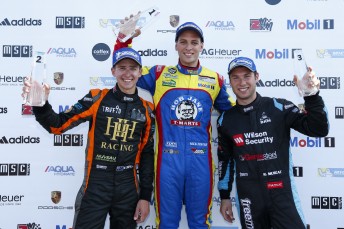 Foster on top, again, this time at Sandown

Nick Foster has won all three races to keep his hot streak running in the Carrera Cup.

Foster has won the last eight of 10 races contested in the series, and after edging to the points lead yesterday is now 18.5 points in front heading to Bathurst.

Foster got off the line ahead of Matt Campbell, and despite the rookie applying plenty of pressure, including going nearly side-by-side across the line, it was the Sonic Motorsport driver that collected maximum points from the weekend.

Third place in the race and for the weekend went the way of Richard Muscat.

A strong comeback for champion Steve Richards who finished fourth in the final race to ease the pain of a DNF in the first race. He was two positions ahead of Craig Baird, who also failed to finish the opener.

It was a delighted Bates who failed to start any races in Sydney after a heavy accident just minutes into the opening session.

The Carrera Cup next races as part of the Bathurst 1000 on the second weekend of October.

VIDEO: Foster and Bates speak after the final race at Sandown